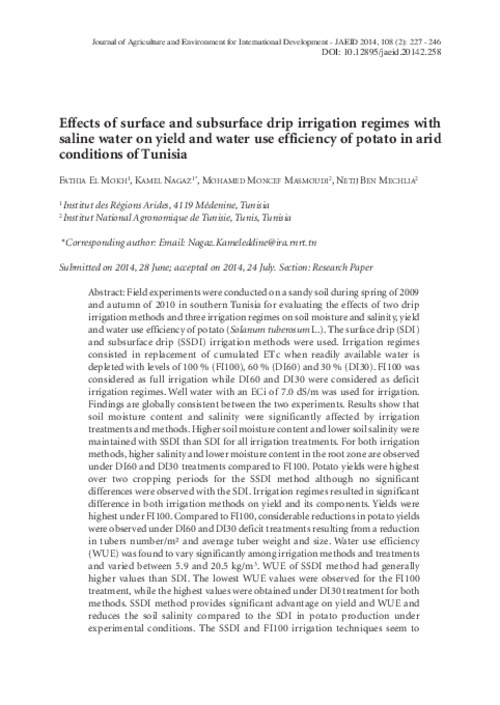 Field experiments were conducted on a sandy soil during spring of 2009 and autumn of 2010 in southern Tunisia for evaluating the effects of two drip irrigation methods and three irrigation regimes on soil moisture and salinity, yield and water use efficiency of potato (Solanum tuberosumL.). The surface drip (SDI) and subsurface drip (SSDI) irrigation methods were used. Irrigation regimes consisted in replacement of cumulated ETc when readily available water is depleted with levels of 100 % (FI100), 60 % (DI60) and 30 % (DI30). FI100 was considered as full irrigation while DI60 and DI30 were considered as deficit irrigation regimes. Well water with an ECi of 7.0 dS/m was used for irrigation. Findings are globally consistent between the two experiments. Results show that soil moisture content and salinity were significantly affected by irrigation treatments and methods. Higher soil moisture content and lower soil salinity were maintained with SSDI than SDI for all irrigation treatments. For both irrigation methods, higher salinity and lower moisture content in the root zone are observed under DI60 and DI30 treatments compared to FI100. Potato yields were highest over two cropping periods for the SSDI method although no significant differences were observed with the SDI. Irrigation regimes resulted in significant difference in both irrigation methods on yield and its components. Yields were highest under FI100. Compared to FI100, considerable reductions in potato yields were observed under DI60 and DI30 deficit treatments resulting from a reduction in tubers number/m² and average tuber weight and size. Water use efficiency (WUE) was found to vary significantly among irrigation methods and treatments and varied between 5.9 and 20.5 kg/m3. WUE of SSDI method had generally higher values than SDI. The lowest WUE values were observed for the FI100 treatment, while the highest values were obtained under DI30 treatment for both methods. SSDI method provides significant advantage on yield and WUE and reduces the soil salinity compared to the SDI in potato production under experimental conditions. The SSDI and FI100 irrigation techniques seem to optimize the use of saline water in potato production and to control soil salinity. Under situations of water shortage, adopting deficit irrigation treatment (DI60) could be an alternative for irrigation scheduling of spring and autumn potato under the arid conditions of southern Tunisia.