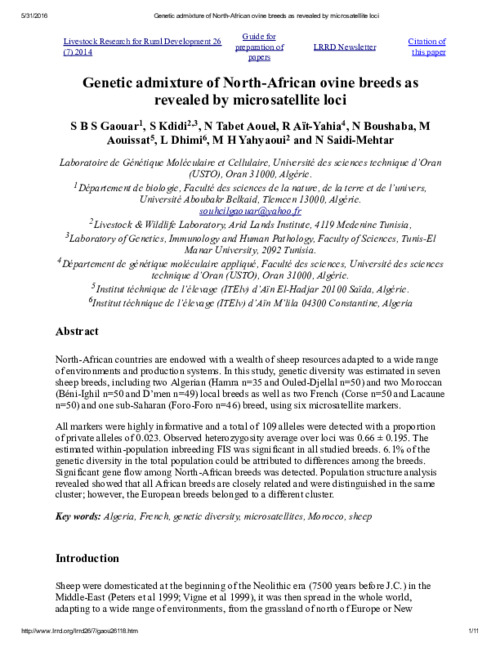 NorthAfrican countries are endowed with a wealth of sheep resources adapted to a wide range of environments and production systems. In this study, genetic diversity was estimated in seven sheep breeds, including two Algerian (Hamra n=35 and OuledDjellal n=50) and two Moroccan (BéniIghil n=50 and D’men n=49) local breeds as well as two French (Corse n=50 and Lacaune n=50) and one subSaharan (ForoForo n=46) breed, using six microsatellite markers. All markers were highly informative and a total of 109 alleles were detected with a proportion of private alleles of 0.023. Observed heterozygosity average over loci was 0.66 ± 0.195. The estimated withinpopulation inbreeding FIS was significant in all studied breeds. 6.1% of the genetic diversity in the total population could be attributed to differences among the breeds. Significant gene flow among NorthAfrican breeds was detected. Population structure analysis revealed showed that all African breeds are closely related and were distinguished in the same cluster; however, the European breeds belonged to a different cluster.