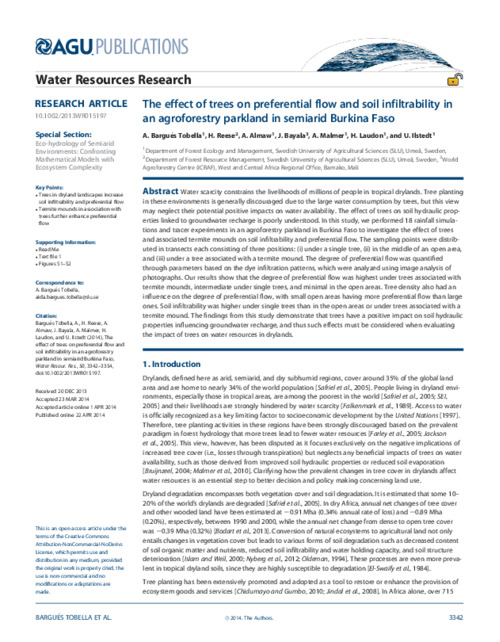 Water scarcity constrains the livelihoods of millions of people in tropical drylands. Tree planting in these environments is generally discouraged due to the large water consumption by trees, but this view may neglect their potential positive impacts on water availability. The effect of trees on soil hydraulic properties linked to groundwater recharge is poorly understood. In this study, we performed 18 rainfall simulations and tracer experiments in an agroforestry parkland in Burkina Faso to investigate the effect of trees and associated termite mounds on soil infiltrability and preferential flow. The sampling points were distributed in transects each consisting of three positions: (i) under a single tree, (ii) in the middle of an open area, and (iii) under a tree associated with a termite mound. The degree of preferential flow was quantified through parameters based on the dye infiltration patterns, which were analyzed using image analysis of photographs. Our results show that the degree of preferential flow was highest under trees associated with termite mounds, intermediate under single trees, and minimal in the open areas. Tree density also had an influence on the degree of preferential flow, with small open areas having more preferential flow than large ones. Soil infiltrability was higher under single trees than in the open areas or under trees associated with a termite mound. The findings from this study demonstrate that trees have a positive impact on soil hydraulic properties influencing groundwater recharge, and thus such effects must be considered when evaluating the impact of trees on water resources in drylands