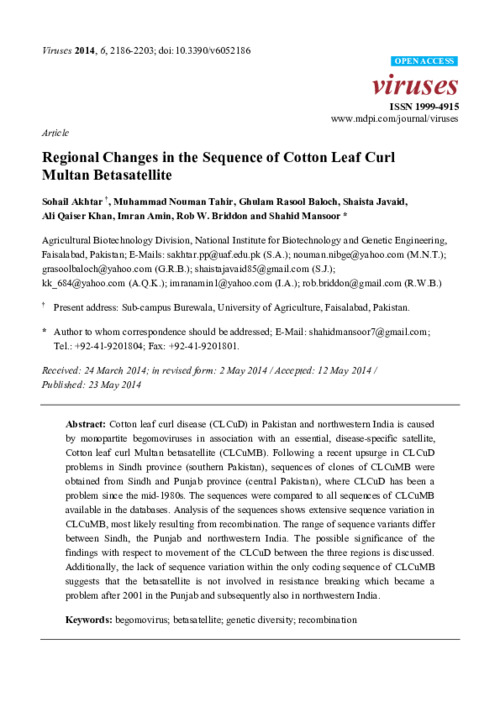 Cotton leaf curl disease (CLCuD) in Pakistan and northwestern India is caused by monopartite begomoviruses in association with an essential, disease-specific satellite, Cotton leaf curl Multan betasatellite (CLCuMB). Following a recent upsurge in CLCuD problems in Sindh province (southern Pakistan), sequences of clones of CLCuMB were obtained from Sindh and Punjab province (central Pakistan), where CLCuD has been a problem since the mid-1980s. The sequences were compared to all sequences of CLCuMB available in the databases. Analysis of the sequences shows extensive sequence variation in CLCuMB, most likely resulting from recombination. The range of sequence variants differ between Sindh, the Punjab and northwestern India. The possible significance of the findings with respect to movement of the CLCuD between the three regions is discussed. Additionally, the lack of sequence variation within the only coding sequence of CLCuMB suggests that the betasatellite is not involved in resistance breaking which became a problem after 2001 in the Punjab and subsequently also in northwestern India