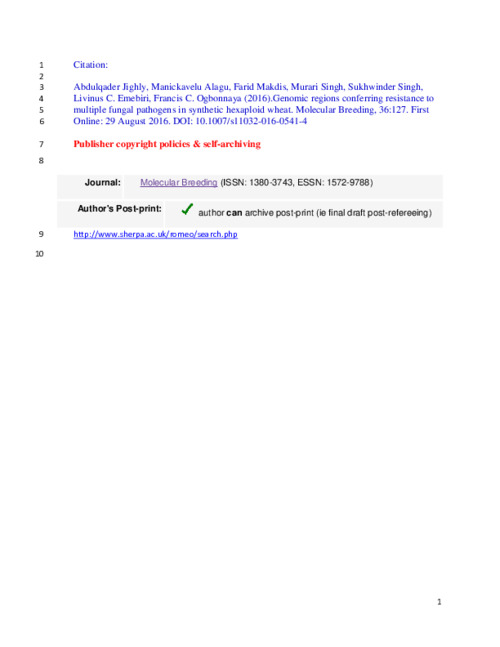 Fungal diseases are among the most devastating biotic stresses and often cause significant losses in wheat production worldwide. A set of 173 synthetic hexaploid wheat (SHW) characterized for resistance against fungal pathogens that cause leaf, stem and yellow rusts, yellow leaf spot, Septoria nodorum and crown rot were used in genome-wide association study (GWAS). Diversity Arrays Technology (DArT) and DArTSeq markers were employed for marker–trait association in which 74 markers associated with 35 quantitative trait loci (QTL) were found to be significantly linked with disease resistances using a unified mixed model (P = 10−3 to 10−5); Of these 15 QTL originated from D genome. Six markers on 1BL, 3BS, 4BL, 6B, and 6D conferred resistance to two diseases representing 10 of the 35 QTL. A further set of 147 SHW genotyped with DArT only markers validated 11 QTL detected in the previous 173 SHW. We also confirmed the presence of the gene Lr46/Yr29/Sr58/Pm39/Ltn2 on 1BL in the SHW germplasm. In addition, gene–gene interactions between significantly associated loci and all loci across the genome revealed five significant interactions at FDR <0.05. Two significant leaf rust and one stem rust interactions were thought to be synergistic, while another two QTL for yellow leaf spot involved antagonistic relations. To the best of our knowledge, this is the first GWAS for six fungal diseases using SHW. Identification of markers associated with disease resistance to one or more diseases represents an important resource for pyramiding favorable alleles and introducing multiple disease resistance from SHW accessions into current elite wheat cultivars