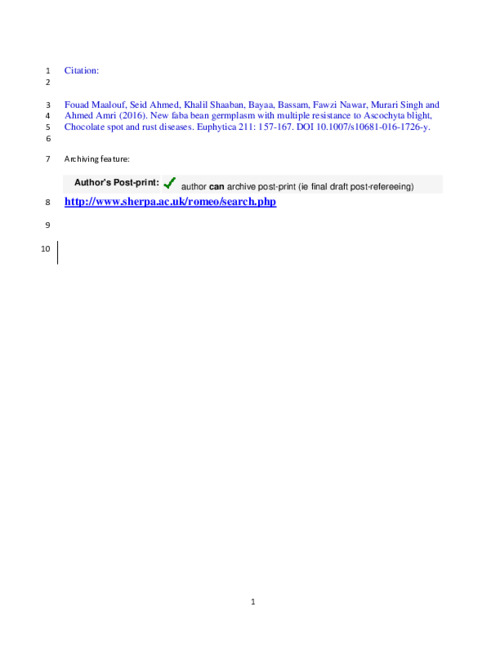 Faba bean is one of the oldest crops originated in Fertile Crescent and distributed around the world and produced under different agro climatic conditions. It mainly cultivated in high rainfall and irrigated areas favoring the development of the foliar diseases causing severe loses in the crop. The purpose of this study is to identify new sources of resistance for the three key foliar diseases. 2000 accessions, breeding lines and populations were screened for different diseases at Lattakia station, Syria from 2005 to 2012. The results showed that multiple disease resistance for two or three diseases were identified. 30 lines combining chocolate spot, Ascochyta blight and rust resistance were selected and evaluated for three seasons from populations collected from China, Italy, Jordan, Lebanon and Spain. 10 improved lines derived from breeding program at ICARDA were developed for disease resistance. These improved sources for resistance will enhance the development of faba bean breeding lines combining the three foliar diseases with other economical traits.