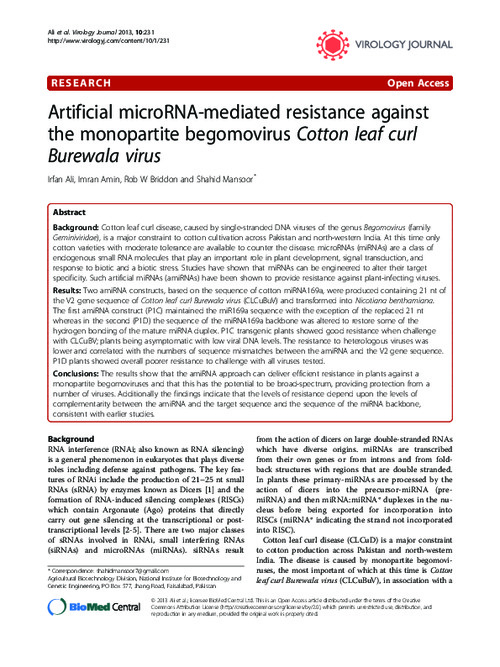 Background: Cotton leaf curl disease, caused by single-stranded DNA viruses of the genus Begomovirus (family Geminiviridae), is a major constraint to cotton cultivation across Pakistan and north-western India. At this time only cotton varieties with moderate tolerance are available to counter the disease. microRNAs (miRNAs) are a class of endogenous small RNA molecules that play an important role in plant development, signal transduction, and response to biotic and a biotic stress. Studies have shown that miRNAs can be engineered to alter their target specificity. Such artificial miRNAs (amiRNAs) have been shown to provide resistance against plant-infecting viruses. Results: Two amiRNA constructs, based on the sequence of cotton miRNA169a, were produced containing 21 nt of the V2 gene sequence of Cotton leaf curl Burewala virus (CLCuBuV) and transformed into Nicotiana benthamiana. The first amiRNA construct (P1C) maintained the miR169a sequence with the exception of the replaced 21 nt whereas in the second (P1D) the sequence of the miRNA169a backbone was altered to restore some of the hydrogen bonding of the mature miRNA duplex. P1C transgenic plants showed good resistance when challenge with CLCuBV; plants being asymptomatic with low viral DNA levels. The resistance to heterologous viruses was lower and correlated with the numbers of sequence mismatches between the amiRNA and the V2 gene sequence. P1D plants showed overall poorer resistance to challenge with all viruses tested. Conclusions: The results show that the amiRNA approach can deliver efficient resistance in plants against a monopartite begomoviruses and that this has the potential to be broad-spectrum, providing protection from a number of viruses. Additionally the findings indicate that the levels of resistance depend upon the levels of complementarity between the amiRNA and the target sequence and the sequence of the miRNA backbone, consistent with earlier studies.