A Genome-Wide Association Study on the Seedless Phenotype in Banana (Musa spp.) Reveals the Potential of a Selected Panel to Detect Candidate Genes in a Vegetatively Propagated Crop 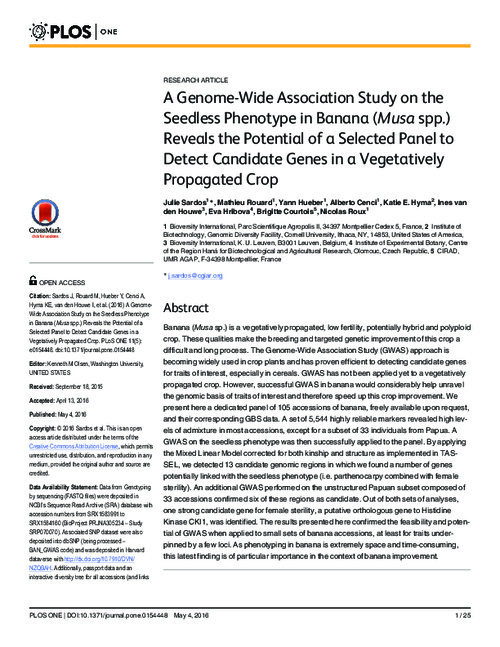 Banana (Musa sp.) is a vegetatively propagated, low fertility, potentially hybrid and polyploid crop. These qualities make the breeding and targeted genetic improvement of this crop a difficult and long process. The Genome-Wide Association Study (GWAS) approach is becoming widely used in crop plants and has proven efficient to detecting candidate genes for traits of interest, especially in cereals. GWAS has not been applied yet to a vegetatively propagated crop. However, successful GWAS in banana would considerably help unravel the genomic basis of traits of interest and therefore speed up this crop improvement. We present here a dedicated panel of 105 accessions of banana, freely available upon request, and their corresponding GBS data. A set of 5,544 highly reliable markers revealed high levels of admixture in most accessions, except for a subset of 33 individuals from Papua. A GWAS on the seedless phenotype was then successfully applied to the panel. By applying the Mixed Linear Model corrected for both kinship and structure as implemented in TASSEL, we detected 13 candidate genomic regions in which we found a number of genes potentially linked with the seedless phenotype (i.e. parthenocarpy combined with female sterility). An additional GWAS performed on the unstructured Papuan subset composed of 33 accessions confirmed six of these regions as candidate. Out of both sets of analyses, one strong candidate gene for female sterility, a putative orthologous gene to Histidine Kinase CKI1, was identified. The results presented here confirmed the feasibility and potential of GWAS when applied to small sets of banana accessions, at least for traits underpinned by a few loci. As phenotyping in banana is extremely space and time-consuming, this latest finding is of particular importance in the context of banana improvement.