Considering effects of temperature and photoperiod on growth and development of lablab purpureus (l.) Sweet in the search of short-season accessions for smallholder farming systems 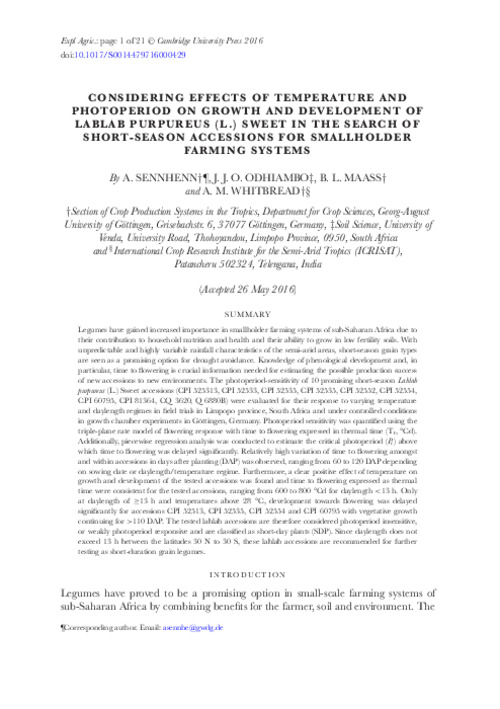 Legumes have gained increased importance in smallholder farming systems of sub-Saharan Africa due to their contribution to household nutrition and health and their ability to grow in low fertility soils. With unpredictable and highly variable rainfall characteristics of the semi-arid areas, short-season grain types are seen as a promising option for drought avoidance. Knowledge of phenological development and, in particular, time to flowering is crucial information needed for estimating the possible production success of new accessions to new environments. The photoperiod-sensitivity of 10 promising short-season Lablab purpureus (L.) Sweet accessions (CPI 525313, CPI 52533, CPI 52535, CPI 52535, CPI 52552, CPI 52554, CPI 60795, CPI 81364, CQ 3620, Q 6880B) were evaluated for their response to varying temperature and daylength regimes in field trials in Limpopo province, South Africa and under controlled conditions in growth chamber experiments in Göttingen, Germany. Photoperiod sensitivity was quantified using the triple-plane rate model of flowering response with time to flowering expressed in thermal time (Tt, °Cd). Additionally, piecewise regression analysis was conducted to estimate the critical photoperiod (Pc) above which time to flowering was delayed significantly. Relatively high variation of time to flowering amongst and within accessions in days after planting (DAP) was observed, ranging from 60 to 120 DAP depending on sowing date or daylength/temperature regime. Furthermore, a clear positive effect of temperature on growth and development of the tested accessions was found and time to flowering expressed as thermal time were consistent for the tested accessions, ranging from 600 to 800 °Cd for daylength <13 h. Only at daylength of ≥13 h and temperatures above 28 °C, development towards flowering was delayed significantly for accessions CPI 52513, CPI 52535, CPI 52554 and CPI 60795 with vegetative growth continuing for >110 DAP. The tested lablab accessions are therefore considered photoperiod insensitive, or weakly photoperiod responsive and are classified as short-day plants (SDP). Since daylength does not exceed 13 h between the latitudes 30 N to 30 S, these lablab accessions are recommended for further testing as short-duration grain legumes.