Are millet and sorghum good alternatives to maize in layer’s feeds in Niger, West Africa? 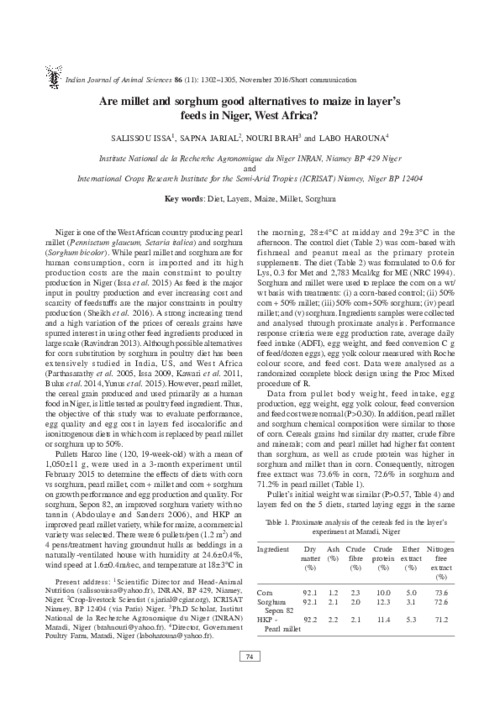 Niger is one of the West African country producing pearl millet (Pennisetum glaucum, Setaria italica) and sorghum (Sorghum bicolor). While pearl millet and sorghum are for human consumption, corn is imported and its high production costs are the main constraint to poultry production in Niger (Issa et al. 2015) As feed is the major input in poultry production and ever increasing cost and scarcity of feedstuffs are the major constraints in poultry production (Sheikh et al. 2016). A strong increasing trend and a high variation of the prices of cereals grains have spurred interest in using other feed ingredients produced in large scale (Ravindran 2013). Although possible alternatives for corn substitution by sorghum in poultry diet has been extensively studied in India, US, and West Africa (Parthasarathy et al. 2005, Issa 2009, Kawari et al. 2011, Bulus et al. 2014, Yunus et al. 2015). However, pearl millet, the cereal grain produced and used primarily as a human food in Niger, is little tested as poultry feed ingredient. Thus, the objective of this study was to evaluate performance, egg quality and egg cost in layers fed isocalorific and isonitrogenous diets in which corn is replaced by pearl millet or sorghum up to 50%...