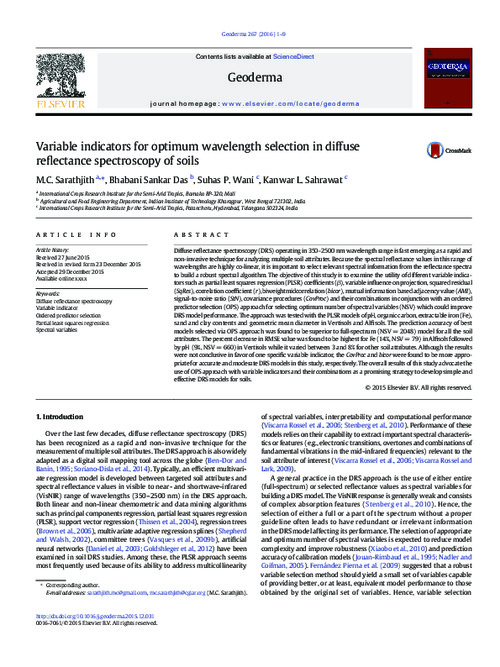 Diffuse reflectance spectroscopy (DRS) operating in 350–2500 nm wave length range is fast emerging as a rapid and non-invasive technique for analyzing multiple soil attributes. Because the spectral reflectance values in this range of wavelengths are highly co-linear, it is important to select relevant spectral information from the reflectance spectra to build a robust spectral algorithm. The objective of this study is to examine the utility of different variable indicators such as partial least squares regression (PLSR) coefficients (β), variable influence on projection, squared residual (SqRes), correlation coefficient (r), biweightmidcorrelation (bicor), mutual information based adjacency value (AMI), signal-to-noise ratio (StN), covariance procedures (CovProc) and their combinations in conjunction with an ordered predictor selection (OPS) approach for selecting optimum number of spectral variables (NSV)which could improve DRS model performance. The approach was tested with the PLSR models of pH, organic carbon, extractable iron (Fe), sand and clay contents and geometric mean diameter in Vertisols and Alfisols. The prediction accuracy of best models selected via OPS approach was found to be superior to full-spectrum (NSV = 2048) model for all the soil attributes. The percent decrease in RMSE value was found to be highest for Fe (14%, NSV=79) in Alfisols followed by pH (9%, NSV=660) in Vertisols while it varied between 3 and 8% for other soil attributes. Although the results were not conclusive in favor of one specific variable indicator, the CovProc and bicorwere found to be more appropriate for accurate and moderate DRS models in this study, respectively. The overall results of this study advocate the use of OPS approach with variable indicators and their combinations as a promising strategy to develop simple and effective DRS models for soils.