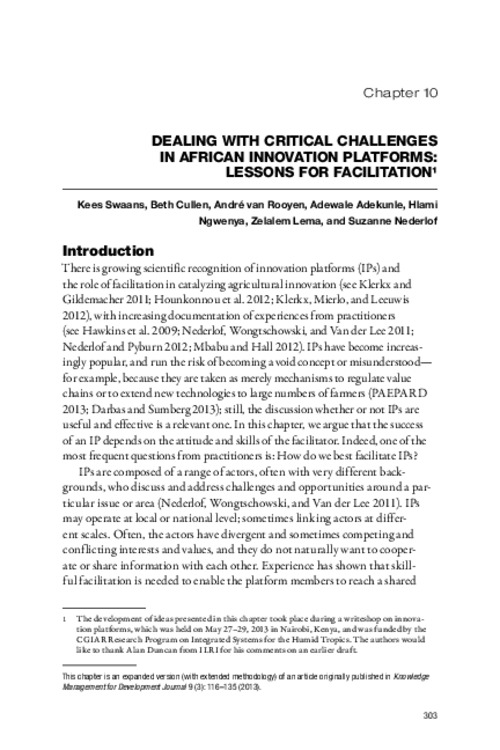 There is growing scientific recognition of innovation platforms (IPs) and the role of facilitation in catalyzing agricultural innovation (see Klerkx and Gildemacher 2011; Hounkonnou et al. 2012; Klerkx, Mierlo, and Leeuwis 2012), with increasing documentation of experiences from practitioners (see Hawkins et al. 2009; Nederlof, Wongtschowski, and Van der Lee 2011; Nederlof and Pyburn 2012; Mbabu and Hall 2012). IPs have become increasingly popular, and run the risk of becoming a void concept or misunderstood—for example, because they are taken as merely mechanisms to regulate value chains or to extend new technologies to large numbers of farmers (PAEPARD 2013; Darbas and Sumberg 2013); still, the discussion whether or not IPs are useful and effective is a relevant one. In this chapter, we argue that the success of an IP depends on the attitude and skills of the facilitator. Indeed, one of the most frequent questions from practitioners is: How do we best facilitate IPs?...