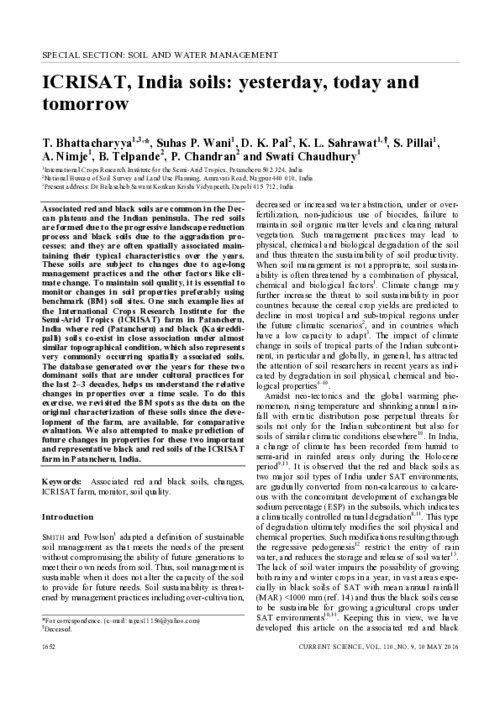 Associated red and black soils are common in the Deccan plateau and the Indian peninsula. The red soils are formed due to the progressive landscape reduction process and black soils due to the aggradation processes; and they are often spatially associated maintaining their typical characteristics over the years. These soils are subject to changes due to age-long management practices and the other factors like climate change. To maintain soil quality, it is essential to monitor changes in soil properties preferably using benchmark (BM) soil sites. One such example lies at the International Crops Research Institute for the Semi-Arid Tropics (ICRISAT) farm in Patancheru, India where red (Patancheru) and black (Kasireddipalli) soils co-exist in close association under almost similar topographical condition, which also represents very commonly occurring spatially associated soils. The database generated over the years for these two dominant soils that are under cultural practices for the last 2–3 decades, helps us understand the relative changes in properties over a time scale. To do this exercise, we revisited the BM spots as the data on the original characterization of these soils since the development of the farm, are available, for comparative evaluation. We also attempted to make prediction of future changes in properties for these two important and representative black and red soils of the ICRISAT farm in Patancheru, India.