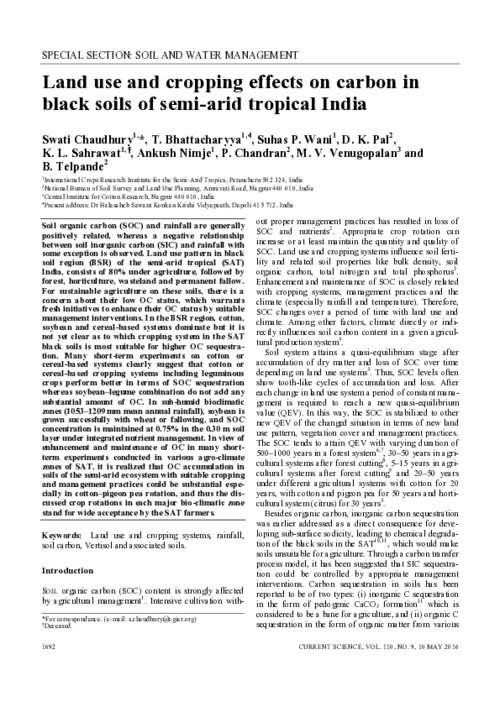 Soil organic carbon (SOC) and rainfall are generally positively related, whereas a negative relationship between soil inorganic carbon (SIC) and rainfall with some exception is observed. Land use pattern in black soil region (BSR) of the semi-arid tropical (SAT) India, consists of 80% under agriculture, followed by forest, horticulture, wasteland and permanent fallow. For sustainable agriculture on these soils, there is a concern about their low OC status, which warrants fresh initiatives to enhance their OC status by suitable management interventions. In the BSR region, cotton, soybean and cereal-based systems dominate but it is not yet clear as to which cropping system in the SAT black soils is most suitable for higher OC sequestration. Many short-term experiments on cotton or cereal-based systems clearly suggest that cotton or cereal-based cropping systems including leguminous crops perform better in terms of SOC sequestration whereas soybean–legume combination do not add any substantial amount of OC. In sub-humid bioclimatic zones (1053–1209 mm mean annual rainfall), soybean is grown successfully with wheat or fallowing, and SOC concentration is maintained at 0.75% in the 0.30 m soil layer under integrated nutrient management. In view of enhancement and maintenance of OC in many shortterm experiments conducted in various agro-climate zones of SAT, it is realized that OC accumulation in soils of the semi-arid ecosystem with suitable cropping and management practices could be substantial especially in cotton–pigeon pea rotation, and thus the discussed crop rotations in each major bio-climatic zone stand for wide acceptance by the SAT farmers.