Tillage impact on soil erosion by water: Discrepancies due to climate and soil characteristics 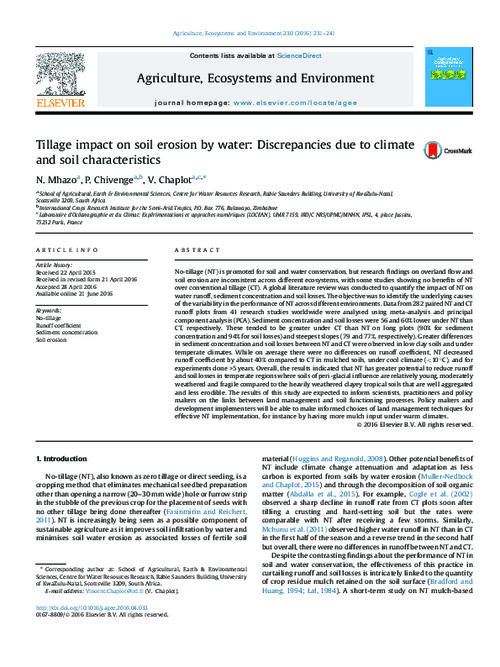 No-tillage (NT) is promoted for soil and water conservation, but research findings on overland flow and soil erosion are inconsistent across different ecosystems, with some studies showing no benefits of NT over conventional tillage (CT). A global literature review was conducted to quantify the impact of NT on water runoff, sediment concentration and soil losses. The objective was to identify the underlying causes of the variability in the performance of NT across different environments. Data from 282 paired NT and CT runoff plots from 41 research studies worldwide were analysed using meta-analysis and principal component analysis (PCA). Sediment concentration and soil losses were 56 and 60% lower under NT than CT, respectively. These tended to be greater under CT than NT on long plots (90% for sediment concentration and 94% for soil losses) and steepest slopes (79 and 77%, respectively). Greater differences in sediment concentration and soil losses between NT and CT were observed in low clay soils and under temperate climates. While on average there were no differences on runoff coefficient, NT decreased runoff coefficient by about 40% compared to CT in mulched soils, under cool climate (<10 C), and for experiments done >5 years. Overall, the results indicated that NT has greater potential to reduce runoff and soil losses in temperate regions where soils of peri-glacial influence are relatively young, moderately weathered and fragile compared to the heavily weathered clayey tropical soils that are well aggregated and less erodible. The results of this study are expected to inform scientists, practitioners and policy makers on the links between land management and soil functioning processes. Policy makers and development implementers will be able to make informed choices of land management techniques for effective NT implementation, for instance by having more mulch input under warm climates.