How fertile are semi-arid tropical soils? 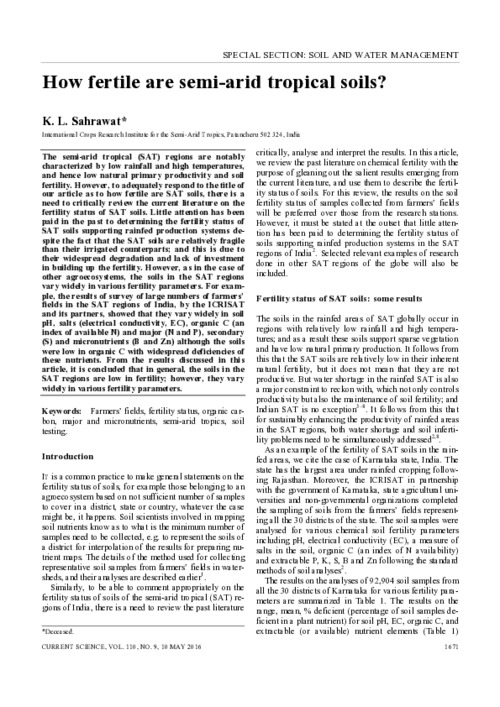 The semiarid tropical (SAT) regions are notably characterized by low rainfall and high temperatures, and hence low natural primary productivity and soil fertility. However, to adequately respond to the title of our article as to how fertile are SAT soils, there is a need to critically review the current literature on the fertility status of SAT soils. Little attention has been paid in the past to determining the fertility status of SAT soils supporting rainfed production systems despite the fact that the SAT soils are relatively fragile than their irrigated counterparts; and this is due to their widespread degradation and lack of investment in building up the fertility. However, as in the case of other agroecosystems, the soils in the SAT regions vary widely in various fertility parameters. For example, the results of survey of large numbers of farmers’ fields in the SAT regions of India, by the ICRISAT and its partners, showed that they vary widely in soil pH, salts (electrical conductivity, EC), organic C (an index of available N) and major (N and P), secondary (S) and micronutrients (B and Zn) although the soils were low in organic C with widespread deficiencies of these nutrients. From the results discussed in this article, it is concluded that in general, the soils in the SAT regions are low in fertility; however, they vary widely in various fertility parameters.