Shallow wells, the untapped resource with a potential to improve agriculture and food security in southern Mali 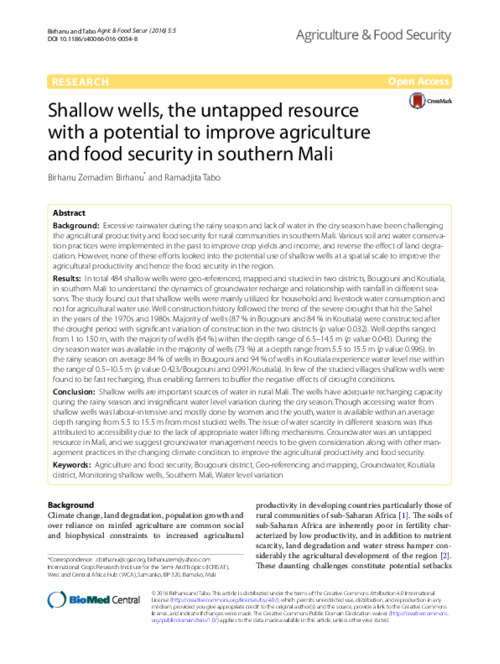 Background: Excessive rainwater during the rainy season and lack of water in the dry season have been challenging the agricultural productivity and food security for rural communities in southern Mali. Various soil and water conservation practices were implemented in the past to improve crop yields and income, and reverse the effect of land degradation. However, none of these efforts looked into the potential use of shallow wells at a spatial scale to improve the agricultural productivity and hence the food security in the region. Results: In total 484 shallow wells were geo-referenced, mapped and studied in two districts, Bougouni and Koutiala, in southern Mali to understand the dynamics of groundwater recharge and relationship with rainfall in different seasons. The study found out that shallow wells were mainly utilized for household and livestock water consumption and not for agricultural water use. Well construction history followed the trend of the severe drought that hit the Sahel in the years of the 1970s and 1980s. Majority of wells (87 % in Bougouni and 84 % in Koutiala) were constructed after the drought period with significant variation of construction in the two districts (p value 0.032). Well depths ranged from 1 to 150 m, with the majority of wells (64 %) within the depth range of 6.5–14.5 m (p value 0.043). During the dry season water was available in the majority of wells (73 %) at a depth range from 5.5 to 15.5 m (p value 0.996). In the rainy season on average 84 % of wells in Bougouni and 94 % of wells in Koutiala experience water level rise within the range of 0.5–10.5 m (p value 0.423/Bougouni and 0.991/Koutiala). In few of the studied villages shallow wells were found to be fast recharging, thus enabling farmers to buffer the negative effects of drought conditions. Conclusion: Shallow wells are important sources of water in rural Mali. The wells have adequate recharging capacity during the rainy season and insignificant water level variation during the dry season. Though accessing water from shallow wells was labour-intensive and mostly done by women and the youth, water is available within an average depth ranging from 5.5 to 15.5 m from most studied wells. The issue of water scarcity in different seasons was thus attributed to accessibility due to the lack of appropriate water lifting mechanisms. Groundwater was an untapped resource in Mali, and we suggest groundwater management needs to be given consideration along with other management practices in the changing climate condition to improve the agricultural productivity and food security.