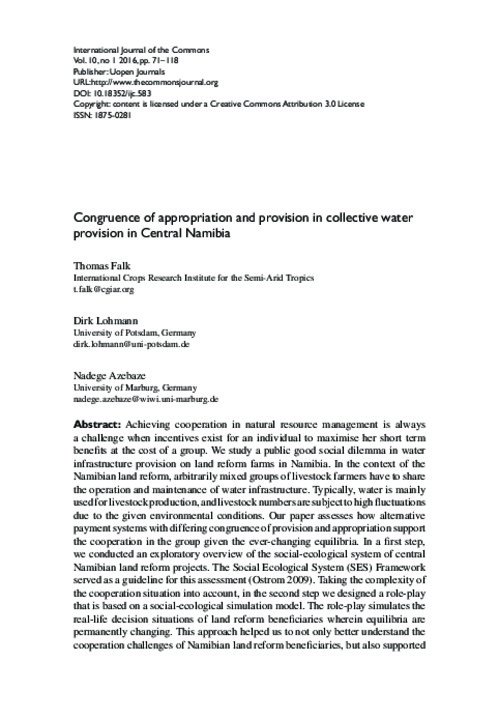 Achieving cooperation in natural resource management is always a challenge when incentives exist for an individual to maximise her short term benefits at the cost of a group. We study a public good social dilemma in water infrastructure provision on land reform farms in Namibia. In the context of the Namibian land reform, arbitrarily mixed groups of livestock farmers have to share the operation and maintenance of water infrastructure. Typically, water is mainly used for livestock production, and livestock numbers are subject to high fluctuations due to the given environmental conditions. Our paper assesses how alternative payment systems with differing congruence of provision and appropriation support the cooperation in the group given the ever-changing equilibria. In a first step, we conducted an exploratory overview of the social-ecological system of central Namibian land reform projects. The Social Ecological System (SES) Framework served as a guideline for this assessment (Ostrom 2009). Taking the complexity of the cooperation situation into account, in the second step we designed a role-play that is based on a social-ecological simulation model. The role-play simulates the real-life decision situations of land reform beneficiaries wherein equilibria are permanently changing. This approach helped us to not only better understand the cooperation challenges of Namibian land reform beneficiaries, but also supported stakeholders in their decision making and institution building. Our study provides evidence to support that land reform beneficiaries increase their contributions as they own more livestock and as other group members increase their payments. Nevertheless, only groups with relatively homogeneous livestock endowments manage to agree on payment rules. Interestingly, the dominant rule is an “equal payment per farmer” and not a “payment per head of livestock”, though the latter would imply a higher congruence of provision and appropriation.