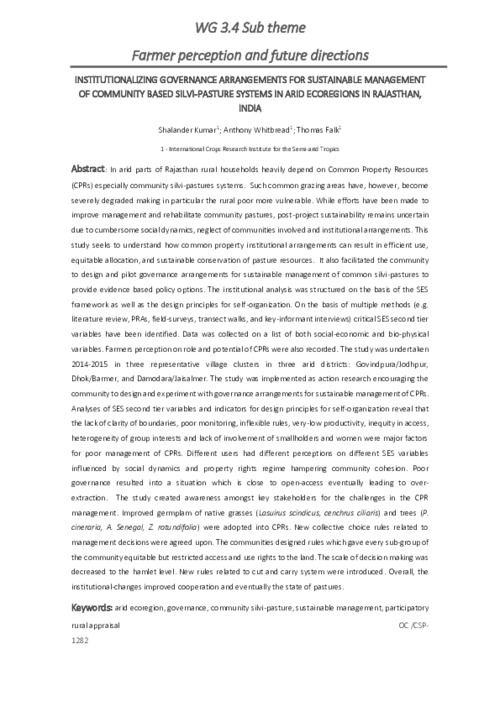 In arid parts of Rajasthan rural households heavily depend on Common Property Resources (CPRs) especially community silvi-pastures systems. Such common grazing areas have, however, become severely degraded making in particular the rural poor more vulnerable. While efforts have been made to improve management and rehabilitate community pastures, post-project sustainability remains uncertain due to cumbersome social dynamics, neglect of communities involved and institutional arrangements. This study seeks to understand how common property institutional arrangements can result in efficient use, equitable allocation, and sustainable conservation of pasture resources. It also facilitated the community to design and pilot governance arrangements for sustainable management of common silvi-pastures to provide evidence based policy options. The institutional analysis was structured on the basis of the SES framework as well as the design principles for self-organization. On the basis of multiple methods (e.g. literature review, PRAs, field-surveys, transect walks, and key-informant interviews) critical SES second tier variables have been identified. Data was collected on a list of both social-economic and bio-physical variables. Farmers perception on role and potential of CPRs were also recorded. The study was undertaken 2014-2015 in three representative village clusters in three arid districts: Govindpura/Jodhpur, Dhok/Barmer, and Damodara/Jaisalmer. The study was implemented as action research encouraging the community to design and experiment with governance arrangements for sustainable management of CPRs. Analyses of SES second tier variables and indicators for design principles for self-organization reveal that the lack of clarity of boundaries, poor monitoring, inflexible rules, very-low productivity, inequity in access, heterogeneity of group interests and lack of involvement of smallholders and women were major factors for poor management of CPRs. Different users had different perceptions on different SES variables influenced by social dynamics and property rights regime hampering community cohesion. Poor governance resulted into a situation which is close to open-access eventually leading to over-extraction. The study created awareness amongst key stakeholders for the challenges in the CPR management. Improved germplam of native grasses (Lasuirus scindicus, cenchrus ciliaris) and trees (P. cineraria, A. Senegal, Z. rotundifolia) were adopted into CPRs. New collective choice rules related to management decisions were agreed upon. The communities designed rules which gave every sub-group of the community equitable but restricted access and use rights to the land. The scale of decision making was decreased to the hamlet level. New rules related to cut and carry system were introduced. Overall, the institutional-changes improved cooperation and eventually the state of pastures.