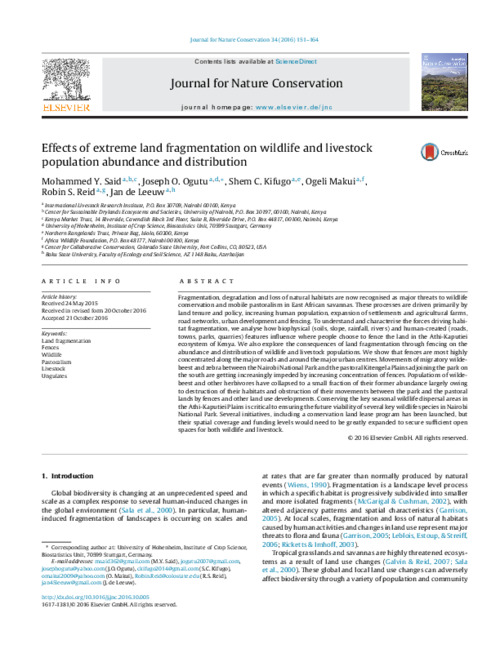 tFragmentation, degradation and loss of natural habitats are now recognised as major threats to wildlifeconservation and mobile pastoralism in East African savannas. These processes are driven primarily byland tenure and policy, increasing human population, expansion of settlements and agricultural farms,road networks, urban development and fencing. To understand and characterise the forces driving habi-tat fragmentation, we analyse how biophysical (soils, slope, rainfall, rivers) and human-created (roads,towns, parks, quarries) features influence where people choose to fence the land in the Athi-Kaputieiecosystem of Kenya. We also explore the consequences of land fragmentation through fencing on theabundance and distribution of wildlife and livestock populations. We show that fences are most highlyconcentrated along the major roads and around the major urban centres. Movements of migratory wilde-beest and zebra between the Nairobi National Park and the pastoral Kitengela Plains adjoining the park onthe south are getting increasingly impeded by increasing concentration of fences. Populations of wilde-beest and other herbivores have collapsed to a small fraction of their former abundance largely owingto destruction of their habitats and obstruction of their movements between the park and the pastorallands by fences and other land use developments. Conserving the key seasonal wildlife dispersal areas inthe Athi-Kaputiei Plains is critical to ensuring the future viability of several key wildlife species in NairobiNational Park. Several initiatives, including a conservation land lease program has been launched, buttheir spatial coverage and funding levels would need to be greatly expanded to secure sufficient openspaces for both wildlife and livestock.