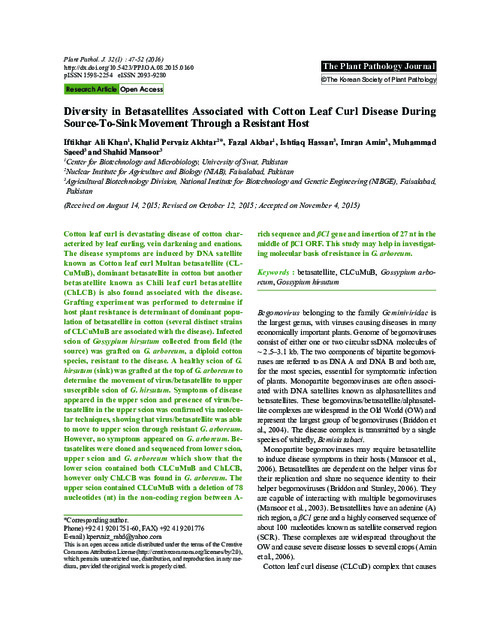 Cotton leaf curl is devastating disease of cotton characterized by leaf curling, vein darkening and enations. The disease symptoms are induced by DNA satellite known as Cotton leaf curl Multan betasatellite (CLCuMuB), dominant betasatellite in cotton but another betasatellite known as Chili leaf curl betasatellite (ChLCB) is also found associated with the disease. Grafting experiment was performed to determine if host plant resistance is determinant of dominant population of betasatellite in cotton (several distinct strains of CLCuMuB are associated with the disease). Infected scion of Gossypium hirsutum collected from field (the source) was grafted on G. arboreum, a diploid cotton species, resistant to the disease. A healthy scion of G. hirsutum (sink) was grafted at the top of G. arboreum to determine the movement of virus/betasatellite to upper susceptible scion of G. hirsutum. Symptoms of disease appeared in the upper scion and presence of virus/betasatellite in the upper scion was confirmed via molecular techniques, showing that virus/betasatellite was able to move to upper scion through resistant G. arboreum. However, no symptoms appeared on G. arboreum. Betasatelites were cloned and sequenced from lower scion, upper scion and G. arboreum which show that the lower scion contained both CLCuMuB and ChLCB, however only ChLCB was found in G. arboreum. The upper scion contained CLCuMuB with a deletion of 78 nucleotides (nt) in the non-coding region between A rich sequence and βC1 gene and insertion of 27 nt in the middle of βC1 ORF. This study may help in investigating molecular basis of resistance in G. arboreum.