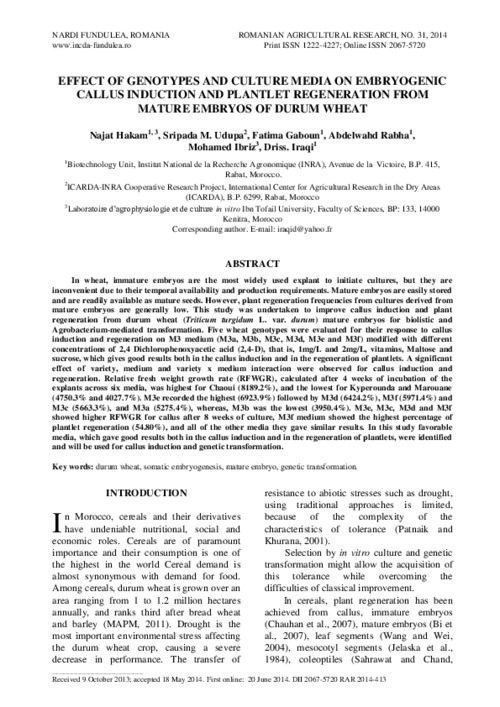 In wheat, immature embryos are the most widely used explant to initiate cultures, but they are inconvenient due to their temporal availability and production requirements. Mature embryos are easily stored and are readily available as mature seeds. However, plant regeneration frequencies from cultures derived from mature embryos are generally low. This study was undertaken to improve callus induction and plant regeneration from durum wheat (Triticum turgidum L. var. durum) mature embryos for biolistic and Agrobacterium-mediated transformation. Five wheat genotypes were evaluated for their response to callus induction and regeneration on M3 medium (M3a, M3b, M3c, M3d, M3e and M3f) modified with different concentrations of 2,4 Dichlorophenoxyacetic acid (2,4-D), that is, 1mg/L and 2mg/L, vitamins, Maltose and sucrose, which gives good results both in the callus induction and in the regeneration of plantlets. A significant effect of variety, medium and variety x medium interaction were observed for callus induction and regeneration. Relative fresh weight growth rate (RFWGR), calculated after 4 weeks of incubation of the explants across six media, was highest for Chaoui (8189.2%), and the lowest for Kyperounda and Marouane (4750.3% and 4027.7%). M3e recorded the highest (6923.9%) followed by M3d (6424.2%), M3f (5971.4%) and M3c (5663.3%), and M3a (5275.4%), whereas, M3b was the lowest (3950.4%). M3e, M3c, M3d and M3f showed higher RFWGR for callus after 8 weeks of culture, M3f medium showed the highest percentage of plantlet regeneration (54.80%), and all of the other media they gave similar results. In this study favorable media, which gave good results both in the callus induction and in the regeneration of plantlets, were identified and will be used for callus induction and genetic transformation.