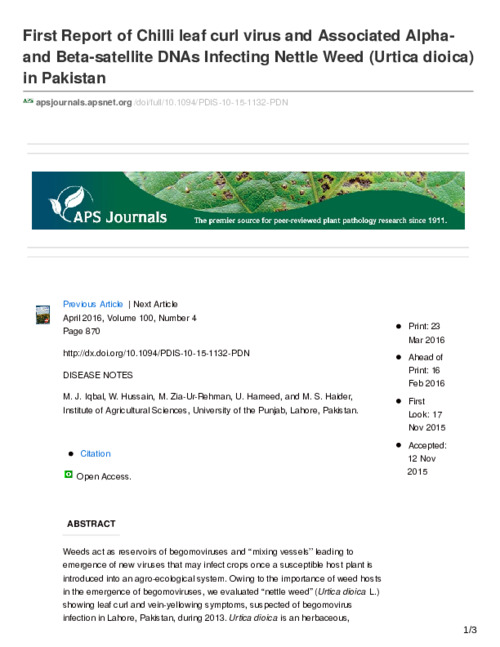 Weeds act as reservoirs of begomoviruses and ‘‘mixing vessels’’ leading to emergence of new viruses that may infect crops once a susceptible host plant is introduced into an agro-ecological system. Owing to the importance of weed hosts in the emergence of begomoviruses, we evaluated “nettle weed” (Urtica dioica L.) showing leaf curl and vein-yellowing symptoms, suspected of begomovirus infection in Lahore, Pakistan, during 2013. Urtica dioica is an herbaceous perennial, flowering plant of the dicotyledonous family Urticaceae. Total DNA was extracted and the presence of begomovirus was confirmed by PCR using coat protein-specific primers from all five symptomatic plants (Haider et al. 2005). To amplify the full-length genome of the begomovirus(es), total DNA was subjected to rolling-circle amplification (RCA) using TempliPhi TM DNA Amplification Kit (GE Healthcare, USA). The presence of ChiLCV was also confirmed by Southern blot hybridization of RCA enriched DNA extracts of the five symptomatic plants using a digoxygenin (DIG)-labeled probe based on nucleotides 1733 to 2511 of the viral replication-associated gene. ChiLCV associated with different betasatellites has been reported to infect important vegetables including chili, tomato, and potato in India and Pakistan. The discovery of ChiLCV, AYLCB, AYVPKA, and BYVA shows that nettle weed harbors this disease complex and may act as a reservoir of this complex to hamper the production of vegetables in the area.