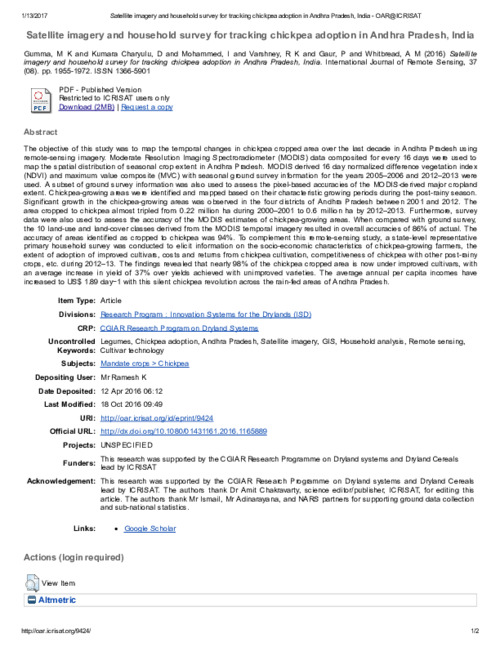 The objective of this study was to map the temporal changes in chickpea cropped area over the last decade in Andhra Pradesh using remote-sensing imagery. Moderate Resolution Imaging Spectroradiometer (MODIS) data composited for every 16 days were used to map the spatial distribution of seasonal crop extent in Andhra Pradesh. MODIS derived 16 day normalized difference vegetation index (NDVI) and maximum value composite (MVC) with seasonal ground survey information for the years 2005– 2006 and 2012–2013 were used. A subset of ground survey information was also used to assess the pixel-based accuracies of the MODIS-derived major cropland extent. Chickpea-growing areas were identified and mapped based on their characteristic growing periods during the post-rainy season. Significant growth in the chickpea-growing areas was observed in the four districts of Andhra Pradesh between 2001 and 2012. The area cropped to chickpea almost tripled from 0.22 million ha during 2000–2001 to 0.6 million ha by 2012–2013. Furthermore, survey data were also used to assess the accuracy of the MODIS estimates of chickpeagrowing areas. When compared with ground survey, the 10 landuse and land-cover classes derived from the MODIS temporal imagery resulted in overall accuracies of 86% of actual. The accuracy of areas identified as cropped to chickpea was 94%. To complement this remote-sensing study, a state-level representative primary household survey was conducted to elicit information on the socio-economic characteristics of chickpea-growing farmers, the extent of adoption of improved cultivars, costs and returns from chickpea cultivation, competitiveness of chickpea with other post-rainy crops, etc. during 2012–13. The findings revealed that nearly 98% of the chickpea cropped area is now under improved cultivars, with an average increase in yield of 37% over yields achieved with unimproved varieties. The average annual per capita incomes have increased to US$ 1.89 day−1 with this silent chickpea revolution across the rain-fed areas of Andhra Pradesh.