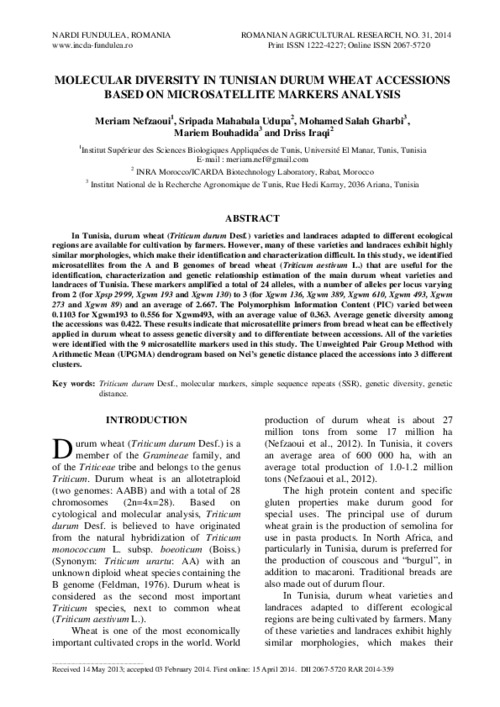 In Tunisia, durum wheat (Triticum durum Desf.) varieties and landraces adapted to different ecological regions are available for cultivation by farmers. However, many of these varieties and landraces exhibit highly similar morphologies, which make their identification and characterization difficult. In this study, we identified microsatellites from the A and B genomes of bread wheat (Triticum aestivum L.) that are useful for the identification, characterization and genetic relationship estimation of the main durum wheat varieties and landraces of Tunisia. These markers amplified a total of 24 alleles, with a number of alleles per locus varying from 2 (for Xpsp 2999, Xgwm 193 and Xgwm 130) to 3 (for Xgwm 136, Xgwm 389, Xgwm 610, Xgwm 493, Xgwm 273 and Xgwm 89) and an average of 2.667. The Polymorphism Information Content (PIC) varied between 0.1103 for Xgwm193 to 0.556 for Xgwm493, with an average value of 0.363. Average genetic diversity among the accessions was 0.422. These results indicate that microsatellite primers from bread wheat can be effectively applied in durum wheat to assess genetic diversity and to differentiate between accessions. All of the varieties were identified with the 9 microsatellite markers used in this study. The Unweighted Pair Group Method with Arithmetic Mean (UPGMA) dendrogram based on Nei’s genetic distance placed the accessions into 3 different clusters.