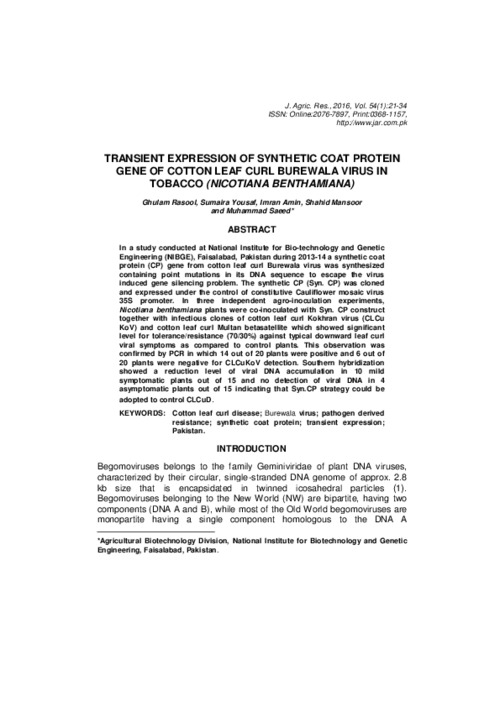 In a study conducted at National Institute for Bio-technology and Genetic Engineering (NIBGE), Faisalabad, Pakistan during 2013-14 a synthetic coat protein (CP) gene from cotton leaf curl Burewala virus was synthesized containing point mutations in its DNA sequence to escape the virus induced gene silencing problem. The synthetic CP (Syn. CP) was cloned and expressed under the control of constitutive Cauliflower mosaic virus 35S promoter. In three independent agro-inoculation experiments, Nicotiana benthamiana plants were co-inoculated with Syn. CP construct together with infectious clones of cotton leaf curl Kokhran virus (CLCu KoV) and cotton leaf curl Multan betasatellite which showed significant level for tolerance/resistance (70/30%) against typical downward leaf curl viral symptoms as compared to control plants. This observation was confirmed by PCR in which 14 out of 20 plants were positive and 6 out of 20 plants were negative for CLCuKoV detection. Southern hybridization showed a reduction level of viral DNA accumulation in 10 mild symptomatic plants out of 15 and no detection of viral DNA in 4 asymptomatic plants out of 15 indicating that Syn.CP strategy could be adopted to control CLCuD.