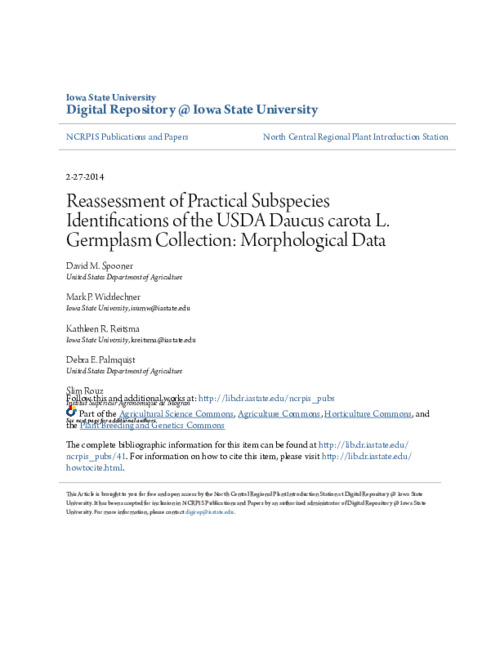 The genus Daucus includes about 20 recognized species. The most widespread and economically important species, Daucus carota L., occurs on almost every continent. The cultivated carrot, subsp. sativus (Hoffm.) Schübl. and G. Martens, has been selected from wild populations that are extremely diverse, especially in the western Mediterranean. The predominant outcrossing and the lack of sexual isolating mechanisms among recognized infraspecific taxa complicate the taxonomy and identification of the wild populations, resulting in widely different interpretations of the number of infraspecific taxa. We measured 36 morphological characters from multiple individuals within each of 155 accessions of D. carota and from the morphologically similar species D. capillifolius (both species 2n = 18) alongside other species for comparison (D. aureus Desf., 2n = 22; D. broteri Ten., 2n = 20; D. involucratus Sm., 2n = 20; and D. littoralis Sm., 2n = 20) in an experimental field plot. Within D. carota, multivariate analyses were able to identify only two subspecies, but even these showed great overlap of individual characters. Because of the ease of crossability of wild D. carota to the domestic landraces and cultivars and because of the taxonomic challenges, the purpose of our study is to explore morphological support for subspecies within D. carota, including the phenetically similar D. capillifolius, which is part of the same clade as D. carota, with the long-term goal of resolving taxonomic disagreements and developing a practical system to classify variation within this economically important species.