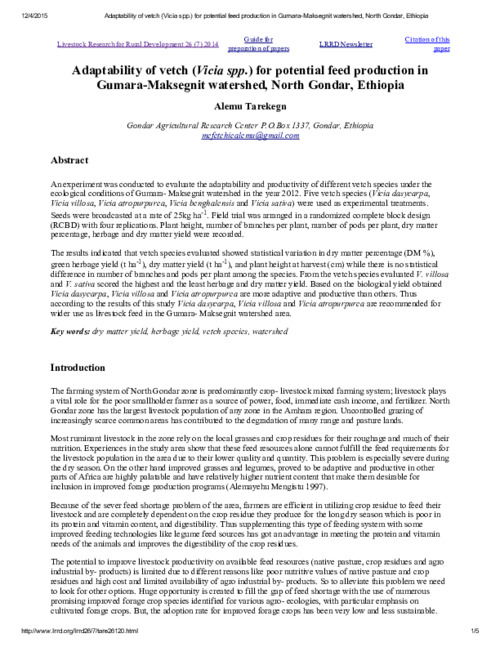 An experiment was conducted to evaluate the adaptability and productivity of different vetch species under the ecological conditions of Gumara­ Maksegnit watershed in the year 2012. Five vetch species (Vicia dasycarpa, Vicia villosa, Vicia atropurpurea, Vicia benghalensis and Vicia sativa) were used as experimental treatments. Seeds were broadcasted at a rate of 25kg ha-­1. Field trial was arranged in a randomized complete block design (RCBD) with four replications. Plant height, number of branches per plant, number of pods per plant, dry matter percentage, herbage and dry matter yield were recorded. The results indicated that vetch species evaluated showed statistical variation in dry matter percentage (DM %), green herbage yield (t ha-1), dry matter yield (t ha-1), and plant height at harvest (cm) while there is no statisticaldifference in number of branches and pods per plant among the species. From the vetch species evaluated V. villosa and V. sativa scored the highest and the least herbage and dry matter yield. Based on the biological yield obtained Vicia dasycarpa, Vicia villosa and Vicia atropurpurea are more adaptive and productive than others. Thus according to the results of this study Vicia dasycarpa, Vicia villosa and Vicia atropurpurea are recommended for wider use as livestock feed in the Gumara­ Maksegnit watershed area.