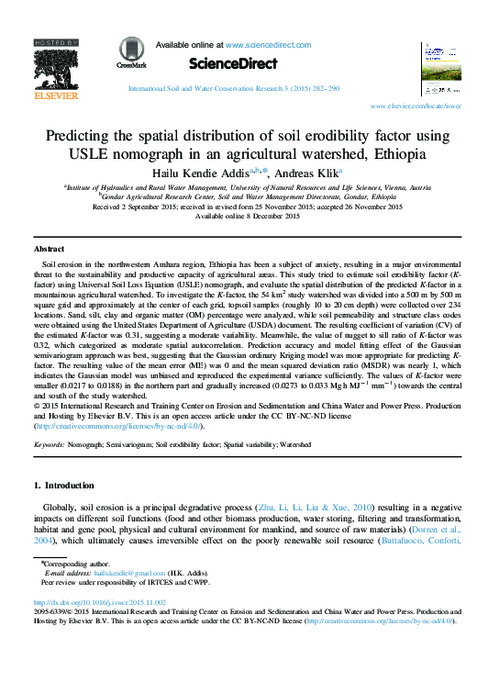 Soil erosion in the northwestern Amhara region, Ethiopia has been a subject of anxiety, resulting in a major environmental threat to the sustainability and productive capacity of agricultural areas. This study tried to estimate soil erodibility factor (Kfactor) using Universal Soil Loss Equation (USLE) nomograph, and evaluate the spatial distribution of the predicted K-factor in a mountainous agricultural watershed. To investigate the K-factor, the 54 km2 study watershed was divided into a 500 m by 500 m square grid and approximately at the center of each grid, topsoil samples (roughly 10 to 20 cm depth) were collected over 234 locations. Sand, silt, clay and organic matter (OM) percentage were analyzed, while soil permeability and structure class codes were obtained using the United States Department of Agriculture (USDA) document. The resulting coefficient of variation (CV) of the estimated K-factor was 0.31, suggesting a moderate variability. Meanwhile, the value of nugget to sill ratio of K-factor was 0.32, which categorized as moderate spatial autocorrelation. Prediction accuracy and model fitting effect of the Gaussian semivariogram approach was best, suggesting that the Gaussian ordinary Kriging model was more appropriate for predicting Kfactor. The resulting value of the mean error (ME) was 0 and the mean squared deviation ratio (MSDR) was nearly 1, which indicates the Gaussian model was unbiased and reproduced the experimental variance sufficiently. The values of K-factor were smaller (0.0217 to 0.0188) in the northern part and gradually increased (0.0273 to 0.033 Mg h MJ 1 mm 1 ) towards the central and south of the study watershed.