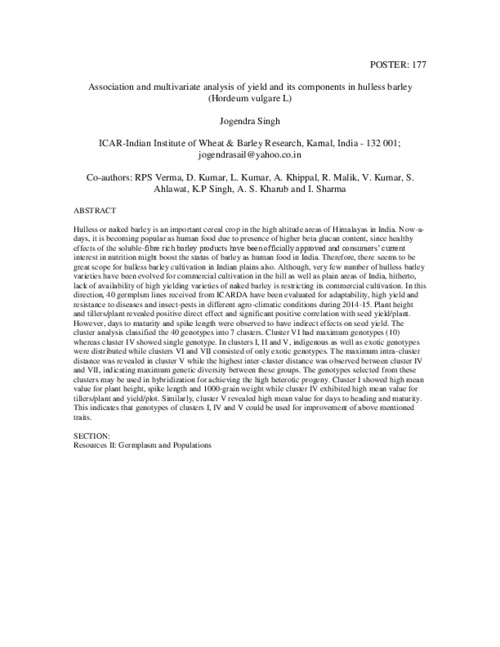 Hulless or naked barley is an important cereal crop in the high altitude areas of Himalayas in India. Now-adays, it is becoming popular as human food due to presence of higher beta glucan content, since healthy effects of the soluble-fibre rich barley products have been officially approved and consumers’ current interest in nutrition might boost the status of barley as human food in India. Therefore, there seems to be great scope for hulless barley cultivation in Indian plains also. Although, very few number of hulless barley varieties have been evolved for commercial cultivation in the hill as well as plain areas of India, hitherto, lack of availability of high yielding varieties of naked barley is restricting its commercial cultivation. In this direction, 40 germplsm lines received from ICARDA have been evaluated for adaptability, high yield and resistance to diseases and insect-pests in different agro-climatic conditions during 2014-15. Plant height and tillers/plant revealed positive direct effect and significant positive correlation with seed yield/plant. However, days to maturity and spike length were observed to have indirect effects on seed yield. The cluster analysis classified the 40 genotypes into 7 clusters. Cluster VI had maximum genotypes (10) whereas cluster IV showed single genotype. In clusters I, II and V, indigenous as well as exotic genotypes were distributed while clusters VI and VII consisted of only exotic genotypes. The maximum intra-cluster distance was revealed in cluster V while the highest inter-cluster distance was observed between cluster IV and VII, indicating maximum genetic diversity between these groups. The genotypes selected from these clusters may be used in hybridization for achieving the high heterotic progeny. Cluster I showed high mean value for plant height, spike length and 1000-grain weight while cluster IV exhibited high mean value for tillers/plant and yield/plot. Similarly, cluster V revealed high mean value for days to heading and maturity. This indicates that genotypes of clusters I, IV and V could be used for improvement of above mentioned traits.