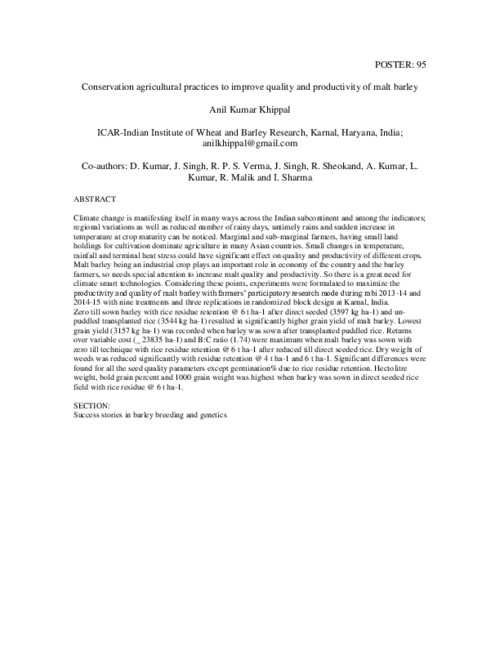 Climate change is manifesting itself in many ways across the Indian subcontinent and among the indicators; regional variations as well as reduced number of rainy days, untimely rains and sudden increase in temperature at crop maturity can be noticed. Marginal and sub-marginal farmers, having small land holdings for cultivation dominate agriculture in many Asian countries. Small changes in temperature, rainfall and terminal heat stress could have significant effect on quality and productivity of different crops. Malt barley being an industrial crop plays an important role in economy of the country and the barley farmers, so needs special attention to increase malt quality and productivity. So there is a great need for climate smart technologies. Considering these points, experiments were formulated to maximize the productivity and quality of malt barley with farmers’ participatory research mode during rabi 2013-14 and 2014-15 with nine treatments and three replications in randomized block design at Karnal, India. Zero till sown barley with rice residue retention @ 6 t ha-1 after direct seeded (3597 kg ha-1) and unpuddled transplanted rice (3544 kg ha-1) resulted in significantly higher grain yield of malt barley. Lowest grain yield (3157 kg ha-1) was recorded when barley was sown after transplanted puddled rice. Returns over variable cost (_ 23835 ha-1) and B:C ratio (1.74) were maximum when malt barley was sown with zero till technique with rice residue retention @ 6 t ha-1 after reduced till direct seeded rice. Dry weight of weeds was reduced significantly with residue retention @ 4 t ha-1 and 6 t ha-1. Significant differences were found for all the seed quality parameters except germination% due to rice residue retention. Hectolitre weight, bold grain percent and 1000 grain weight was highest when barley was sown in direct seeded rice field with rice residue @ 6 t ha-1.