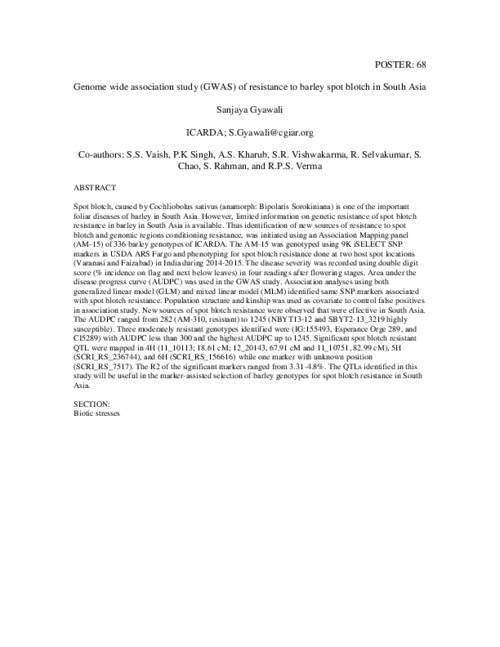 Spot blotch, caused by Cochliobolus sativus (anamorph: Bipolaris Sorokiniana) is one of the important foliar diseases of barley in South Asia. However, limited information on genetic resistance of spot blotch resistance in barley in South Asia is available. Thus identification of new sources of resistance to spot blotch and genomic regions conditioning resistance, was initiated using an Association Mapping panel (AM-15) of 336 barley genotypes of ICARDA. The AM-15 was genotyped using 9K iSELECT SNP markers in USDA ARS Fargo and phenotyping for spot blotch resistance done at two host spot locations (Varanasi and Faizabad) in India during 2014-2015. The disease severity was recorded using double digit score (% incidence on flag and next below leaves) in four readings after flowering stages. Area under the disease progress curve (AUDPC) was used in the GWAS study. Association analyses using both generalized linear model (GLM) and mixed linear model (MLM) identified same SNP markers associated with spot blotch resistance. Population structure and kinship was used as covariate to control false positives in association study. New sources of spot blotch resistance were observed that were effective in South Asia. The AUDPC ranged from 282 (AM-310, resistant) to 1245 (NBYT13-12 and SBYT2-13_3219 highly susceptible). Three moderately resistant genotypes identified were (IG:155493, Esperance Orge 289, and CI5289) with AUDPC less than 300 and the highest AUDPC up to 1245. Significant spot blotch resistant QTL were mapped in 4H (11_10113; 18.61 cM; 12_20143, 67.91 cM and 11_10751, 82.99 cM), 5H (SCRI_RS_236744), and 6H (SCRI_RS_156616) while one marker with unknown position (SCRI_RS_7517). The R2 of the significant markers ranged from 3.31-4.8%. The QTLs identified in this study will be useful in the marker-assisted selection of barley genotypes for spot blotch resistance in South Asia.