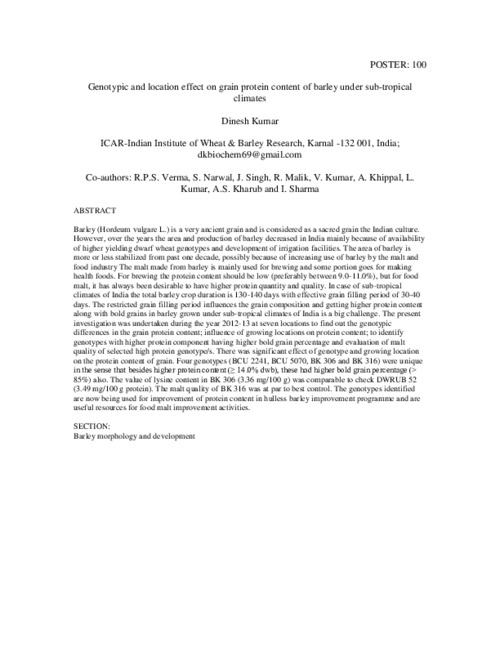 Barley (Hordeum vulgare L.) is a very ancient grain and is considered as a sacred grain the Indian culture. However, over the years the area and production of barley decreased in India mainly because of availability of higher yielding dwarf wheat genotypes and development of irrigation facilities. The area of barley is more or less stabilized from past one decade, possibly because of increasing use of barley by the malt and food industry The malt made from barley is mainly used for brewing and some portion goes for making health foods. For brewing the protein content should be low (preferably between 9.0-11.0%), but for food malt, it has always been desirable to have higher protein quantity and quality. In case of sub-tropical climates of India the total barley crop duration is 130-140 days with effective grain filling period of 30-40 days. The restricted grain filling period influences the grain composition and getting higher protein content along with bold grains in barley grown under sub-tropical climates of India is a big challenge. The present investigation was undertaken during the year 2012-13 at seven locations to find out the genotypic differences in the grain protein content; influence of growing locations on protein content; to identify genotypes with higher protein component having higher bold grain percentage and evaluation of malt quality of selected high protein genotype/s. There was significant effect of genotype and growing location on the protein content of grain. Four genotypes (BCU 2241, BCU 5070, BK 306 and BK 316) were unique in the sense that besides higher protein content (≥ 14.0% dwb), these had higher bold grain percentage (> 85%) also. The value of lysine content in BK 306 (3.36 mg/100 g) was comparable to check DWRUB 52 (3.49 mg/100 g protein). The malt quality of BK 316 was at par to best control. The genotypes identified are now being used for improvement of protein content in hulless barley improvement programme and are useful resources for food malt improvement activities.