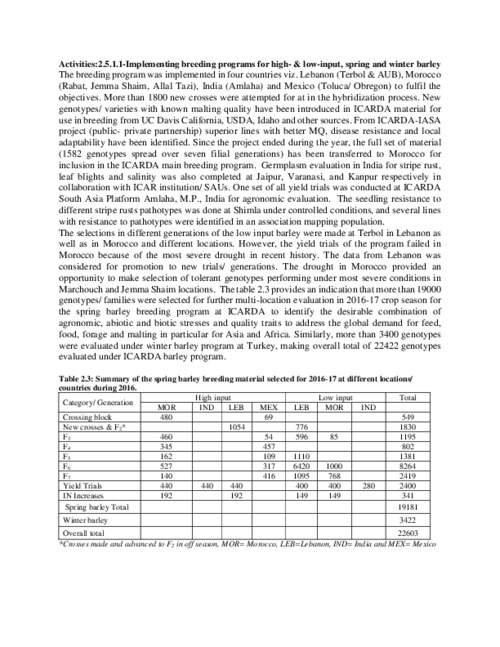 The breeding program was implemented in four countries viz. Lebanon (Terbol & AUB), Morocco (Rabat, Jemma Shaim, Allal Tazi), India (Amlaha) and Mexico (Toluca/ Obregon) to fulfil the objectives. More than 1800 new crosses were attempted for at in the hybridization process. New genotypes/ varieties with known malting quality have been introduced in ICARDA material for use in breeding from UC Davis California, USDA, Idaho and other sources. From ICARDA-IASA project (public- private partnership) superior lines with better MQ, disease resistance and local adaptability have been identified. Since the project ended during the year, the full set of material (1582 genotypes spread over seven filial generations) has been transferred to Morocco for inclusion in the ICARDA main breeding program. Germplasm evaluation in India for stripe rust, leaf blights and salinity was also completed at Jaipur, Varanasi, and Kanpur respectively in collaboration with ICAR institution/ SAUs. One set of all yield trials was conducted at ICARDA South Asia Platform Amlaha, M.P., India for agronomic evaluation. The seedling resistance to different stripe rusts pathotypes was done at Shimla under controlled conditions, and several lines with resistance to pathotypes were identified in an association mapping population.