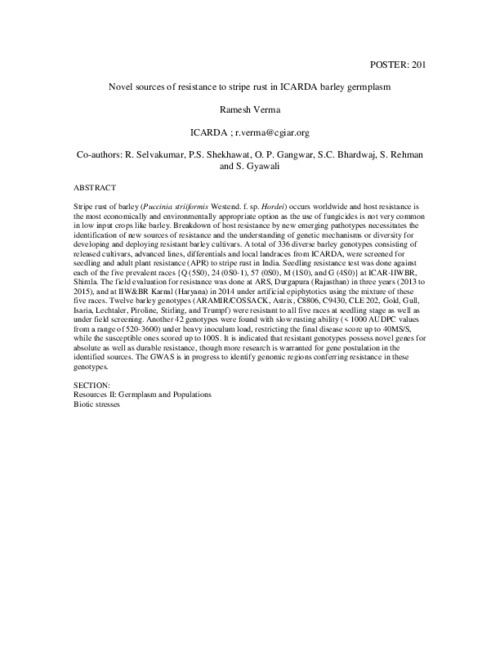 Stripe rust of barley (Puccinia striiformis Westend. f. sp. Hordei) occurs worldwide and host resistance is the most economically and environmentally appropriate option as the use of fungicides is not very common in low input crops like barley. Breakdown of host resistance by new emerging pathotypes necessitates the identification of new sources of resistance and the understanding of genetic mechanisms or diversity for developing and deploying resistant barley cultivars. A total of 336 diverse barley genotypes consisting of released cultivars, advanced lines, differentials and local landraces from ICARDA, were screened for seedling and adult plant resistance (APR) to stripe rust in India. Seedling resistance test was done against each of the five prevalent races {Q (5S0), 24 (0S0-1), 57 (0S0), M (1S0), and G (4S0)} at ICAR-IIWBR, Shimla. The field evaluation for resistance was done at ARS, Durgapura (Rajasthan) in three years (2013 to 2015), and at IIW&BR Karnal (Haryana) in 2014 under artificial epiphytotics using the mixture of these five races. Twelve barley genotypes (ARAMIR/COSSACK, Astrix, C8806, C9430, CLE 202, Gold, Gull, Isaria, Lechtaler, Piroline, Stirling, and Trumpf) were resistant to all five races at seedling stage as well as under field screening. Another 42 genotypes were found with slow rusting ability (< 1000 AUDPC values from a range of 520-3600) under heavy inoculum load, restricting the final disease score up to 40MS/S, while the susceptible ones scored up to 100S. It is indicated that resistant genotypes possess novel genes for absolute as well as durable resistance, though more research is warranted for gene postulation in the identified sources. The GWAS is in progress to identify genomic regions conferring resistance in these genotypes.