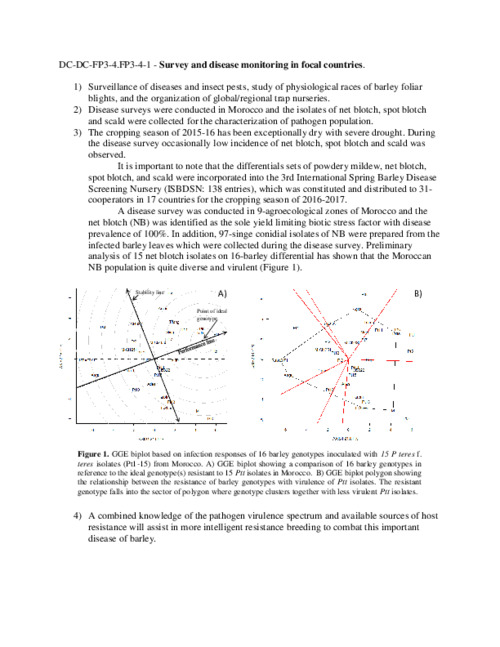 The cropping season of 2015-16 has been exceptionally dry with severe drought. During the disease survey occasionally low incidence of net blotch, spot blotch and scald was observed. It is important to note that the differentials sets of powdery mildew, net blotch, spot blotch, and scald were incorporated into the 3rd International Spring Barley Disease Screening Nursery (ISBDSN: 138 entries), which was constituted and distributed to 31-cooperators in 17 countries for the cropping season of 2016-2017. A disease survey was conducted in 9-agroecological zones of Morocco and the net blotch (NB) was identified as the sole yield limiting biotic stress factor with disease prevalence of 100%. In addition, 97-singe conidial isolates of NB were prepared from the infected barley leaves which were collected during the disease survey. Preliminary analysis of 15 net blotch isolates on 16-barley differential has shown that the Moroccan NB population is quite diverse and virulent