Use of hotspots for screening of each disease / pest 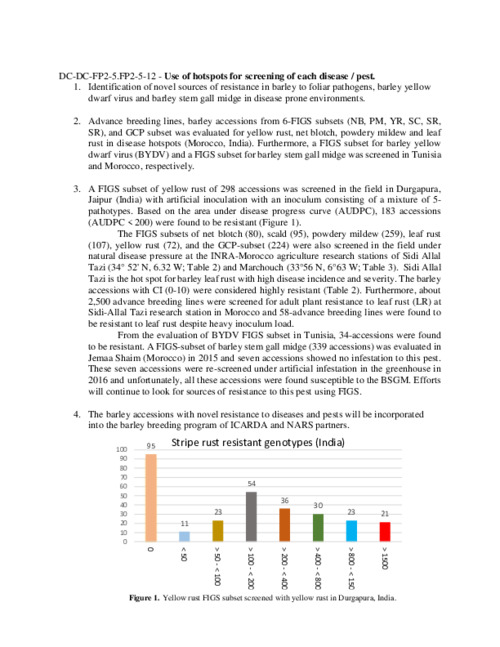 A FIGS subset of yellow rust of 298 accessions was screened in the field in Durgapura, Jaipur (India) with artificial inoculation with an inoculum consisting of a mixture of 5-pathotypes. Based on the area under disease progress curve (AUDPC), 183 accessions (AUDPC < 200) were found to be resistant (Figure 1). The FIGS subsets of net blotch (80), scald (95), powdery mildew (259), leaf rust (107), yellow rust (72), and the GCP-subset (224) were also screened in the field under natural disease pressure at the INRA-Morocco agriculture research stations of Sidi Allal Tazi (34° 52' N, 6.32 W; Table 2) and Marchouch (33°56 N, 6°63 W; Table 3). Sidi Allal Tazi is the hot spot for barley leaf rust with high disease incidence and severity. The barley accessions with CI (0-10) were considered highly resistant (Table 2). Furthermore, about 2,500 advance breeding lines were screened for adult plant resistance to leaf rust (LR) at Sidi-Allal Tazi research station in Morocco and 58-advance breeding lines were found to be resistant to leaf rust despite heavy inoculum load. From the evaluation of BYDV FIGS subset in Tunisia, 34-accessions were found to be resistant. A FIGS-subset of barley stem gall midge (339 accessions) was evaluated in Jemaa Shaim (Morocco) in 2015 and seven accessions showed no infestation to this pest. These seven accessions were re-screened under artificial infestation in the greenhouse in 2016 and unfortunately, all these accessions were found susceptible to the BSGM. Efforts will continue to look for sources of resistance to this pest using FIGS.