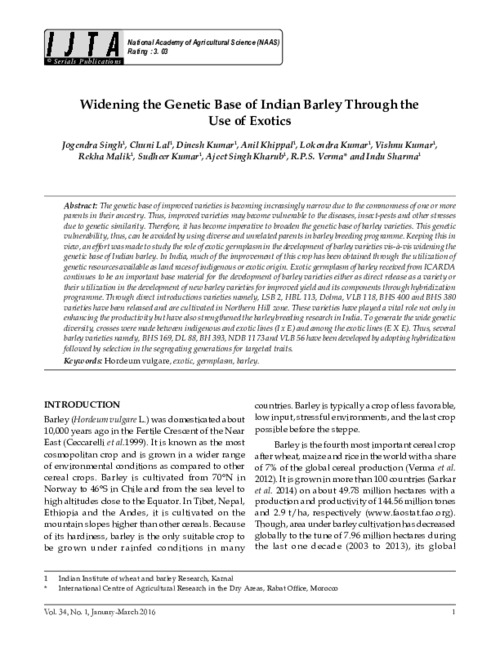 The genetic base of improved varieties is becoming increasingly narrow due to the commonness of one or more parents in their ancestry. Thus, improved varieties may become vulnerable to the diseases, insect-pests and other stresses due to genetic similarity. Therefore, it has become imperative to broaden the genetic base of barley varieties. This genetic vulnerability, thus, can be avoided by using diverse and unrelated parents in barley breeding programme. Keeping this in view, an effort was made to study the role of exotic germplasm in the development of barley varieties vis-à-vis widening the genetic base of Indian barley. In India, much of the improvement of this crop has been obtained through the utilization of genetic resources available as land races of indigenous or exotic origin. Exotic germplasm of barley received from ICARDA continues to be an important base material for the development of barley varieties either as direct release as a variety or their utilization in the development of new barley varieties for improved yield and its components through hybridization programme. Through direct introductions varieties namely, LSB 2, HBL 113, Dolma, VLB 118, BHS 400 and BHS 380 varieties have been released and are cultivated in Northern Hill zone. These varieties have played a vital role not only in enhancing the productivity but have also strengthened the barley breeding research in India. To generate the wide genetic diversity, crosses were made between indigenous and exotic lines (I x E) and among the exotic lines (E X E). Thus, several barley varieties namely, BHS 169, DL 88, BH 393, NDB 1173 and VLB 56 have been developed by adopting hybridization followed by selection in the segregating generations for targeted traits.