Setting up a Community based flock management programs 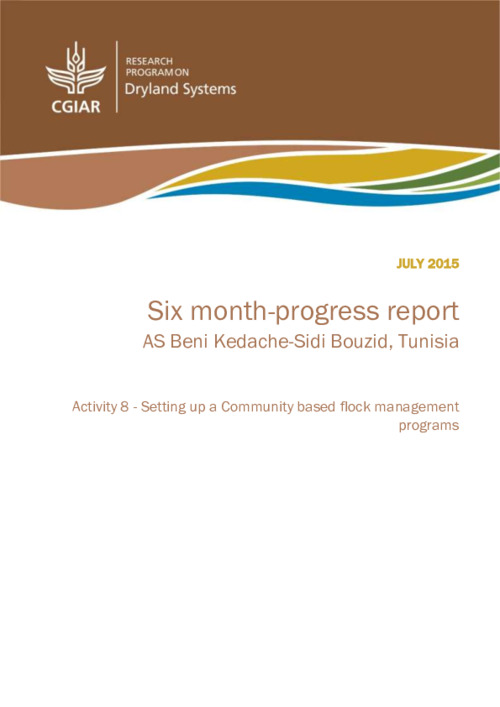 Integration is based on the principle of the interactions between two or more components of the production system. Interactive research based on interdisciplinary approach involving NARS and ICARDA’s scientists is important to develop integrated crop-livestock systems in the low rainfall areas. The site of Sidi-Bouzid is characterized by a large and rapidly increasing food and feed shortage, highly variable income levels, and limited natural resources, particularly arable land and water. Inhabitants are poor, most socially disadvantaged, and disfavored in terms of infrastructural and institutional support. A large number of the small farmers in the region are deriving most of their family income from barley/livestock based systems particularly and because sheep fattening is quite profitable in the region. In fact, Sidi-Bouzid region is implemented produced in 2014, 325,000 lambs for the Eid festivity, which represent 38% of the total national lamb production. The CRP Dryland Systems implemented in Zoghmar community (Governorate of Sidi Bouzid) is focusing on Community-based flock management, identification of sheep practices to meet lamb market demand, determination of nutrient deficiencies in small ruminant flocks, seasonal characterization of small ruminant feeding systems, and determination of water footprints and the water productivity of animal products in the action site. In addition, and in order to increase feed availability, (i) agroforestry practices (alley cropping) were introduced to farmers to reduce pressure on rangelands, fill gaps in feed resources, reduce soil erosion, enhance infiltration, and boost carbon sequestration and (ii) Conservation Agriculture (CA) practices has been proposed as an adapted set of management principles and as a viable and feasible option toward farm which can also contribute to make agricultural systems more resilient to climate change.