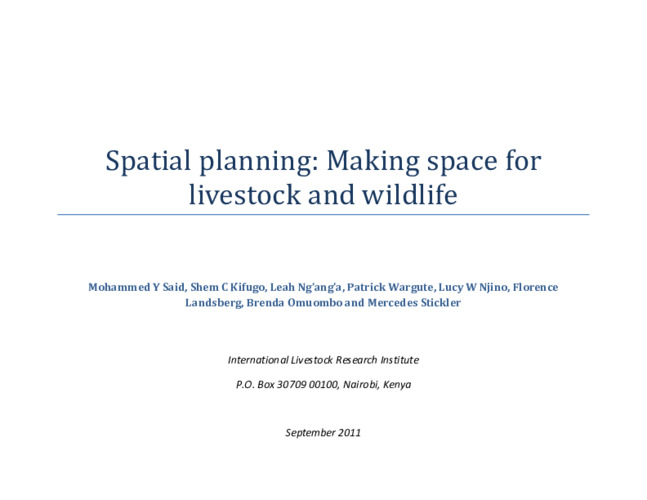 Ecosystem‐based planning seeks to identify and understand the important ecological characteristics of a landscape or region, and then use this information to design plans that guide the development of ecologically‐responsible human activities. The integration of ecosystem services into decisions relies on access to good scientific information showing where ecosystem services are provided and how they will be affected by alternative plans and policies. The Arid and Semi‐Arid Lands (ASALs) cover 80% of Kenya’s land area, and cut across 39 districts, mainly in Rift Valley, Eastern, Northeastern and Coast Provinces (World Bank 2010). The ASALs account for almost 30 percent of Kenya’ population and host about 70% of the national livestock population with an estimated value of Ksh 70 billion (World Bank 2010). A vast majority (74%) of ASAL constituents were poor in 2005/06; poverty rates in the ASALs have increased from 65% in 1994 (KIHBS 2005/6 cited in MDNKOAL 2008), which contrasts with the rest of Kenya ‐‐ national poverty rates fell from 52% to 46% in the decade 1996‐2006. Similar stark inequalities between the ASALs and other areas of Kenya are found in health and education as well as infrastructure development and services provisioning (MDNKOAL 2010). The ASALs need special attention in order to achieve sustainable economic development (World Bank 2010) and after decades of neglect, the government is committed to close the development gap between the ASALs and the rest of Kenya. The Government of Kenya (GoK) increasingly acknowledges the special attention the ASALs need in order to achieve poverty reduction and economic growth (World Bank 2010). To do so, it charged the Ministry of State for Development of Northern Kenya and other Arid Lands (MDNKOAL) to develop policies and interventions addressing the challenges specific to ASAL, mostly regarding their climate, pastoral and agro‐pastoral livelihood strategies and low infrastructure, financial, and human capitals (MDNKOAL 2008). Unlike line ministries with sectoral development planning, MDNKOAL has a cross‐sectoral mandate, which requires a holistic approach to development, weighing trade‐offs and promoting synergies between sectoral objectives. To achieve this mandate, MDNKOAL and other government ministries require up‐to‐date spatial information that can be analyzed to inform evidence‐based planning and decision‐making.