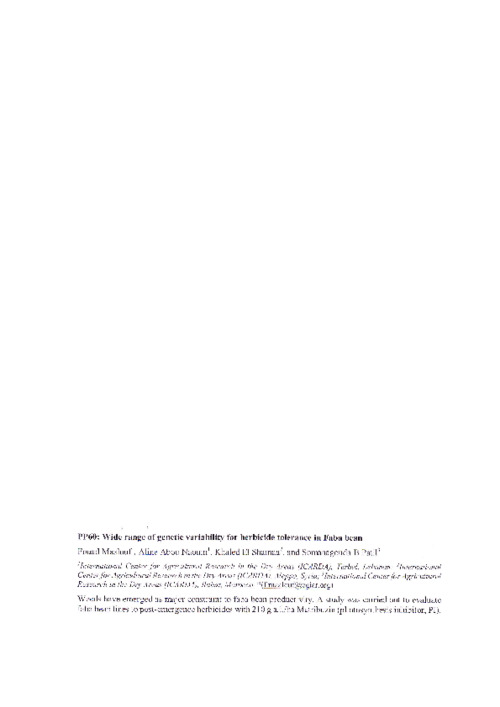 Weeds have emerged as major constraint to faba bean productivity. A study was caried out to evaluate faba bean lines to post-emergence herbicides with 210 g a.i.lha Metribuzin (photosynthesis inhibitor, PI), 82 ga.i.lha Oxyfluorfen and15 ga.i.lha Imazethapyr (amino acid synthesis inhibitor). A set of 140 accessions were planted in augmented design with three repetitive checks (ILB 1 8 14, BPLT 1 0 and Elizar) at Marchouch station, Morocco and the same accessions along with 28 adVanced lines were evaluated in alpha design with two replications at Terbol station, Lebanon. In both locations, each plot was divided in three sub-plots for herbicide treatments (Tl for Metribuzin, T2 for Ox/luorfen,T3Imazethapyr) and a control (water spray, C). Herbicide tolerance score, HTS (1-5 scale) was recorded at 3- and 5-weeks after herbicide treatment, where 1 : highly tolerant (similar appearance as C), 3 - moderately tolerant (clear difference on plant appearance comparing with C, with necrosis in lower leaves and less than25o/o death of the plants), 4 : sensitive (no further development of new leaves with severe burning of leaves with more death between 25o/o and 75"/o of the plants), and 5 : highly sensitive (compiete burning of leaves leading to more IhanT5o/o mortality of the plants). Plant height and seed weight were recorded for the treated sub-plots and the controls. Data were analyzed for each location separately and the results indrcated significant differences among genotlpes and treatments for plant height and seed weight in both locations. In both locations plant height was lower in treated plots than the control. Chlorosis, rolling of apical leaves, reduced growth, and lower nurnber of pods and mortality were sighted on the genotypes for the three herbicides. Oxyfluorfen affected the growth of most of faba bean genotlpes at early stage, but after three weeks tolerant lines showed recovery of vegetative growth and showed no significant difference for seed weight between treated and non-treated plots. Among the tested lines 62 were considered tolerant to Metribuzin, 72 were tolerant to Oxyfluorfen and 46 were tolerant to Imazethapyr