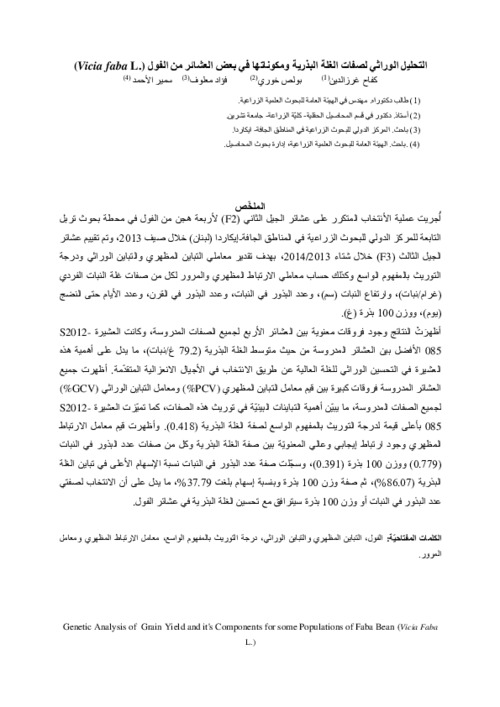 Fouad Maalouf. (21/2/2017). Genetic Analysis of Grain Yield and it's Components for some Populations of Faba Bean.

The recurrent selection was applied on four F2 populations of faba bean at Terbol research station (ICARDA)- Lebanon, during 2013 summer season, advanced F3 populations were evaluated during 2013-2014 winter season to estimate the following indicators: phenotypic (PCV%) and genotypic (GCV%) coefficients of variation, broad sense heritability (HBS), phenotypic correlation coefficient and path coefficient for the following traits: seed yield (gr.plant-1), plant height (cm), number of seeds per plants, number of seeds per pod, days to maturity (day) and hundred seed weight (gr). Results revealed that the populations means significantly differed for all studied traits, and the population S2012-085 had the best yield value among populations under research (79.2 g.plant-1), showing the importance of such population in developing high yielding lines of faba bean by selection in advance generation, wide difference between phenotypic and genotypic coefficient of variations have been detected for all traits under research, these results emphasized that the environmental factors had a high effects on the inheritance of such traits. The highest estimate of broad sense heritability (BSH) for seed yield character was recorded by the population S2012-085 (0.418). Significant positive correlations were detected between seed yield and each of number of seeds per plant (0.779) and hundred seed weight (0.391). Path coefficient analysis estimates indicated that number of seeds per plant trait had the highest related importance percentage on seed yield variation (86.07), followed by hundred seed weight (37.79%). These findings indicates that selection for number of seeds per plant and/or hundred seed weight would be accompanied by high yielding ability under such populations.