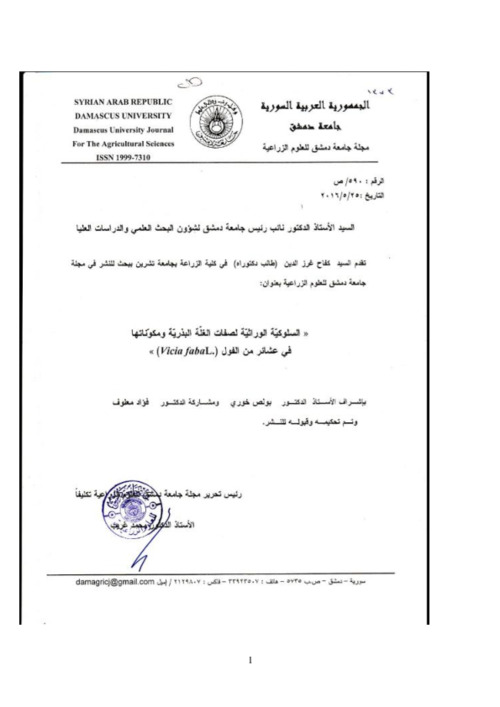 Five populations of faba bean were advanced from F2 to F3 generations by recurrent selection at Terbol Research Station, International Centre for Agricultural Research in The Dry Areas (ICARDA), Lebanon. During the first growing season (summer 2013). The produced genotypes of selection were evaluated during the second growing season (winter 2013/2014) in order to estimate the narrow-sense heritability and genetic advance for number of pods per plant, number of seeds per plant, 100-seed weight and seed yield traits. The results showed that S2012-085 population was superior in heritability for seed yield (0.500), 100-seed weight (0.500) and pods per plant (0.500), while the population S2012-133 was recorded the highest heritability value for seeds per plant (0.702). The results showed that genetic advance for seed yield trait ranged from 11.4 to 19.39 g.plant-1 , and the highest value of genetic advance of seed yield was recorded on the population S2012-018 (19.395 g). Moderate values of narrow sense heritability accompanied with high values of genetic advance were recorded for all traits under research in most populations, indicating to the importance of additive gene action. Consequently, recurrent selection is very important to apply in order to improve the traits across segregated generations of faba bean.