Anthroscape: A Holistic Landscape Based Approach for Mitigating Environmental Threats of 21st Century 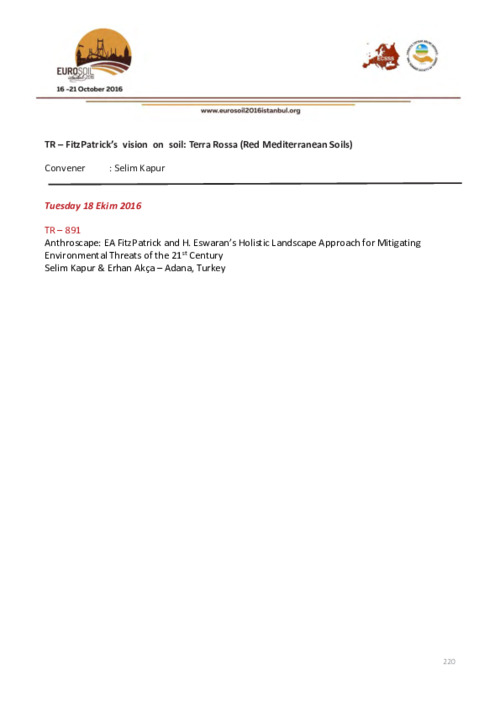 Centuries are remembered with human achievements alike the bronze age, the iron age of archaic and the 20th century as the age of innovation. However, the 21st century will be remembered as the age of extinction due to globally destructive land degradation and desertification, climate change and biodiversity loss. Humans shaped the environment in a sustainable way until the 18th century with few exceptions of salinity in Mesopotamia and the Indus Valley and the soil nutrient depletion of the Mayas. Other than arable lands even extreme landscapes in mountains and arid areas are converted to productive domains by water saving, cropping, animal husbandry via constructing terraces, water ways and other infrastructures. This arrangement leading to the development of human shaped landscapes is named as the ‘anthroscapes’ of today. The ‘Anthroscape’ context includes the knowledge of present and ancient land use, topography, natural resources, biodiversity and climate of a region. Moreover, it concerns the balance between natural resource consumption and human needs. Turkey, is rich in anthroscapes due to its varying topographic and climatic conditions. While the Mediterranean anthroscapes, the semi-arid part of Turkey, focused on water saving and terrace farming since the Hittites, Romans and the Ottomans, the East Anatolian anthroscapes were meant for use as extensive rangelands due to the highly privileged environment in local plant species that secured fodder in the long winters since the Urartians, Romans and Ottomans. The opulence of various anthroscapes in Anatolia may be led to mitigate current global threats of climate change, land degradation and desertification and loss of biodiversity because of their high carbon sequestration potential, water saving capabilities and the conserved biodiversity zones. Anthroscapes reflect the human ability of challenging harsh conditions via their environmental friendly experiences accumulated since millennia