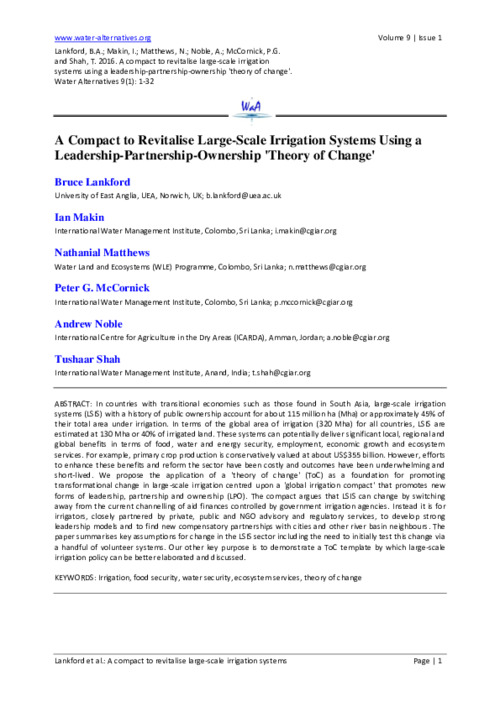 In countries with transitional economies such as those found in South Asia, large-scale irrigation systems (LSIS) with a history of public ownership account for about 115 million ha (Mha) or approximately 45% of their total area under irrigation. In terms of the global area of irrigation (320 Mha) for all countries, LSIS are estimated at 130 Mha or 40% of irrigated land. These systems can potentially deliver significant local, regional and global benefits in terms of food, water and energy security, employment, economic growth and ecosystem services. For example, primary crop production is conservatively valued at about US$355 billion. However, efforts to enhance these benefits and reform the sector have been costly and outcomes have been underwhelming and short-lived. We propose the application of a 'theory of change' (ToC) as a foundation for promoting transformational change in large-scale irrigation centred upon a 'global irrigation compact' that promotes new forms of leadership, partnership and ownership (LPO). The compact argues that LSIS can change by switching away from the current channelling of aid finances controlled by government irrigation agencies. Instead it is for irrigators, closely partnered by private, public and NGO advisory and regulatory services, to develop strong leadership models and to find new compensatory partnerships with cities and other river basin neighbours. The paper summarises key assumptions for change in the LSIS sector including the need to initially test this change via a handful of volunteer systems. Our other key purpose is to demonstrate a ToC template by which large-scale irrigation policy can be better elaborated and discussed.