A new concept of irrigation response units for effective management of surface and groundwater resources: a case study from the multi‑country Fergana Valley, Central Asia 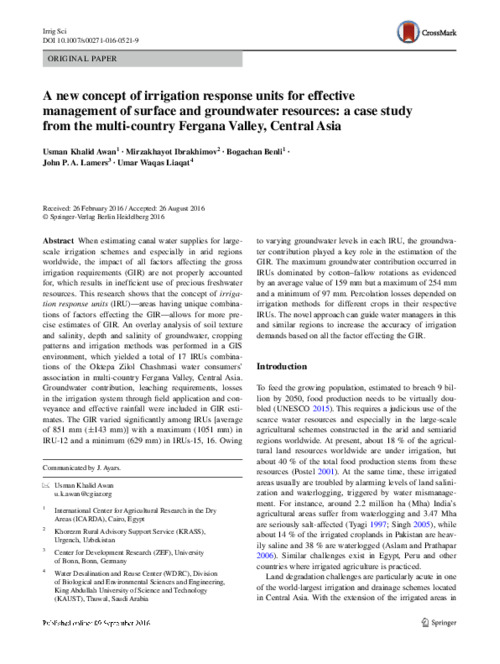 When estimating canal water supplies for largescale irrigation schemes and especially in arid regions worldwide, the impact of all factors affecting the gross irrigation requirements (GIR) are not properly accounted for, which results in ineffcient use of precious freshwater resources. This research shows that the concept of irrigation response units (IRU)—areas having unique combinations of factors effecting the GIR—allows for more precise estimates of GIR. An overlay analysis of soil texture and salinity, depth and salinity of groundwater, cropping patterns and irrigation methods was performed in a GIS environment, which yielded a total of 17 IRUs combinations of the Oktepa Zilol Chashmasi water consumers’ association in multi-country Fergana Valley, Central Asia. Groundwater contribution, leaching requirements, losses in the irrigation system through feld application and conveyance and effective rainfall were included in GIR estimates. The GIR varied signifcantly among IRUs [average of 851 mm (±143 mm)] with a maximum (1051 mm) in IRU-12 and a minimum (629 mm) in IRUs-15, 16. Owing to varying groundwater levels in each IRU, the groundwater contribution played a key role in the estimation of the GIR. The maximum groundwater contribution occurred in IRUs dominated by cotton–fallow rotations as evidenced by an average value of 159 mm but a maximum of 254 mm and a minimum of 97 mm. Percolation losses depended on irrigation methods for different crops in their respective IRUs. The novel approach can guide water managers in this and similar regions to increase the accuracy of irrigation demands based on all the factor effecting the GIR.