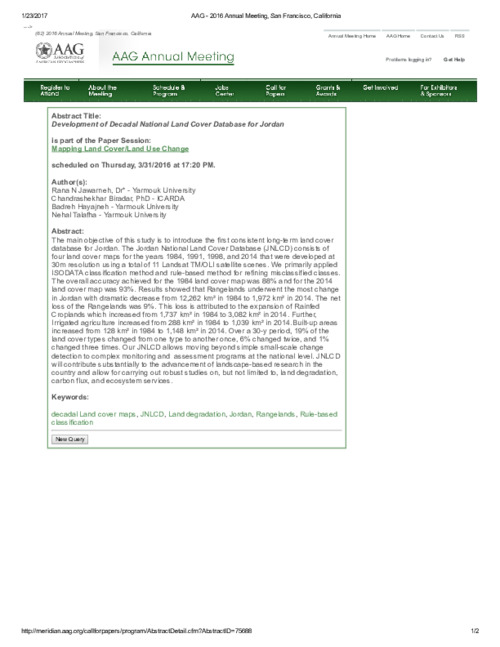 The main objective of this study is to introduce the first consistent long ­term land cover database for Jordan. The Jordan National Land Cover Database (JNLCD) consists of four land cover maps for the years 1984, 1991, 1998, and 2014 that were developed at 30m resolution using a total of 11 Landsat TM/OLI satellite scenes. We primarily applied ISO DATA classification method and rule ­based method for refining misclassified classes. The overall accuracy achieved for the 1984 land cover map was 88% and for the 2014 land cover map was 93%. Results showed that Rangelands underwent the most change in Jordan with dramatic decrease from 12,262 km2 in 1984 to 1,972 km2 in 2014. The net loss of the Rangelands was 9%. This loss is attributed to the expansion of Rain fed Croplands which increased from 1,737 km2 in 1984 to 3,082 km2 in 2014. Further, Irrigated agriculture increased from 288 km2 in 1984 to 1,039 km2 in 2014. Built ­up areas increased from 128 km2 in 1984 to 1,148 km2 in 2014. Over a 30­y period, 19% of the land cover types changed from one type to another once, 6% changed twice, and 1% changed three times. Our JNLCD allows moving beyond simple small­ scale change detection to complex monitoring and assessment programs at the national level. JNLCD will contribute substantially to the advancement of landscape ­based research in the country and allow for carrying out robust studies on, but not limited to, land degradation, carbon flux, and ecosystem services.