Preliminary microscopic and mineralogical characterization of relict calcretes in Morocco 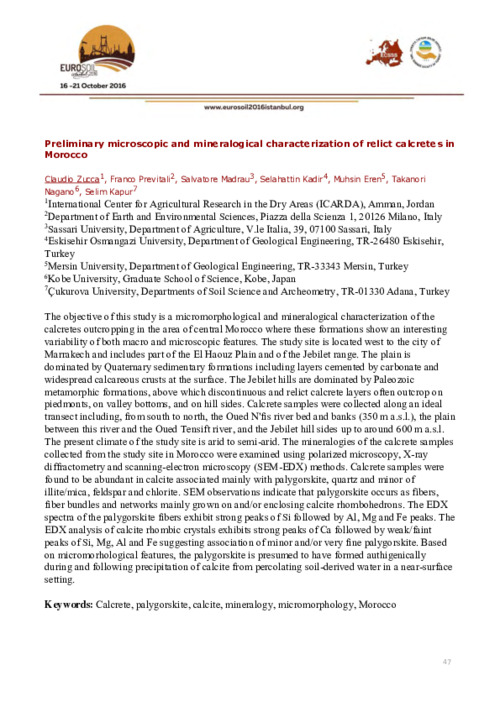 The objective of this study is a micromorphological and mineralogical characterization of the calcretes outcropping in the area of central Morocco where these formations show an interesting variability of both macro and microscopic features. The study site is located west to the city of Marrakech and includes part of the El Haouz Plain and of the Jebilet range. The plain is dominated by Quaternary sedimentary formations including layers cemented by carbonate and widespread calcareous crusts at the surface. The Jebilet hills are dominated by Paleozoic metamorphic formations, above which discontinuous and relict calcrete layers often outcrop on piedmonts, on valley bottoms, and on hill sides. Calcrete samples were collected along an ideal transect including, from south to north, the Oued N'fis river bed and banks (350 m a.s.l.), the plain between this river and the Oued Tensift river, and the Jebilet hill sides up to around 600 m a.s.l. The present climate of the study site is arid to semi-arid. The mineralogies of the calcrete samples collected from the study site in Morocco were examined using polarized microscopy, X-ray diffractometry and scanning-electron microscopy (SEM-EDX) methods. Calcrete samples were found to be abundant in calcite associated mainly with palygorskite, quartz and minor of illite/mica, feldspar and chlorite. SEM observations indicate that palygorskite occurs as fibers, fiber bundles and networks mainly grown on and/or enclosing calcite rhombohedrons. The EDX spectra of the palygorskite fibers exhibit strong peaks of Si followed by Al, Mg and Fe peaks. The EDX analysis of calcite rhombic crystals exhibits strong peaks of Ca followed by weak/faint peaks of Si, Mg, Al and Fe suggesting association of minor and/or very fine palygorskite. Based on micromorhological features, the palygorskite is presumed to have formed authigenically during and following precipitation of calcite from percolating soil-derived water in a near-surface setting.