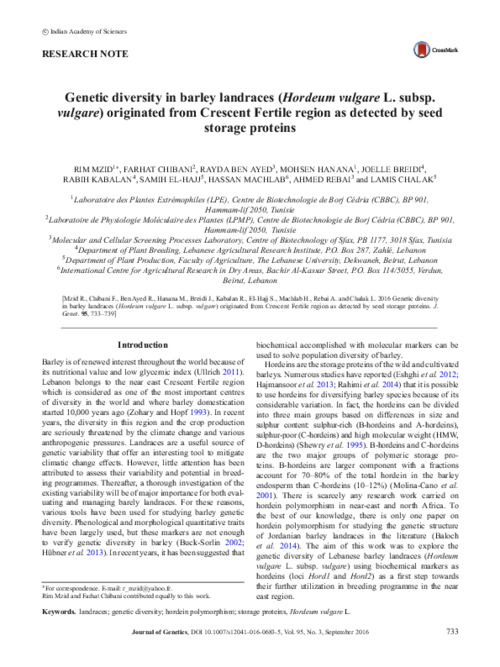 Barley is of renewed interest throughout the world because of its nutritional value and low glycemic index (Ullrich 2011). Lebanon belongs to the near east Crescent Fertile region which is considered as one of the most important centres of diversity in the world and where barley domestication started 10,000 years ago (Zohary and Hopf 1993). In recent years, the diversity in this region and the crop production are seriously threatened by the climate change and various anthropogenic pressures. Landraces are a useful source of genetic variability that offer an interesting tool to mitigate climatic change effects. However, little attention has been attributed to assess their variability and potential in breed- ing programmes. Thereafter, a thorough investigation of the existing variability will be of major importance for both evaluating and managing barely landraces. For these reasons, various tools have been used for studying barley genetic diversity. Phenological and morphological quantitative traits have been largely used, but these markers are not enough to verify genetic diversity in barley (Buck-Sorlin 2002; Hübner et al. 2013). In recent years, it has been suggested that biochemical accomplished with molecular markers can be used to solve population diversity of barley. Hordeins are the storage proteins of the wild and cultivated barleys. Numerous studies have reported (Eshghi et al. 2012; Hajmansoor et al. 2013; Rahimi et al. 2014) that it is possible to use hordeins for diversifying barley species because of its considerable variation. In fact, the hordeins can be divided into three main groups based on differences in size and sulphur content: sulphur-rich (B-hordeins and A-hordeins), sulphur-poor (C-hordeins) and high molecular weight (HMW, D-hordeins) (Shewry et al. 1995). B-hordeins and C-hordeins are the two major groups of polymeric storage pro- teins. B-hordeins are larger component with a fractions account for 70–80% of the total hordein in the barley endosperm than C-hordeins (10–12%) (Molina-Cano et al. 2001). There is scarcely any research work carried on hordein polymorphism in near-east and north Africa. To the best of our knowledge, there is only one paper on hordein polymorphism for studying the genetic structure of Jordanian barley landraces in the literature (Baloch et al. 2014). The aim of this work was to explore the genetic diversity of Lebanese barley landraces (Hordeum vulgare L. subsp. vulgare) using biochemical markers as hordeins (loci Hord1 and Hord2) as a first step towards their further utilization in breeding programme in the near east region.