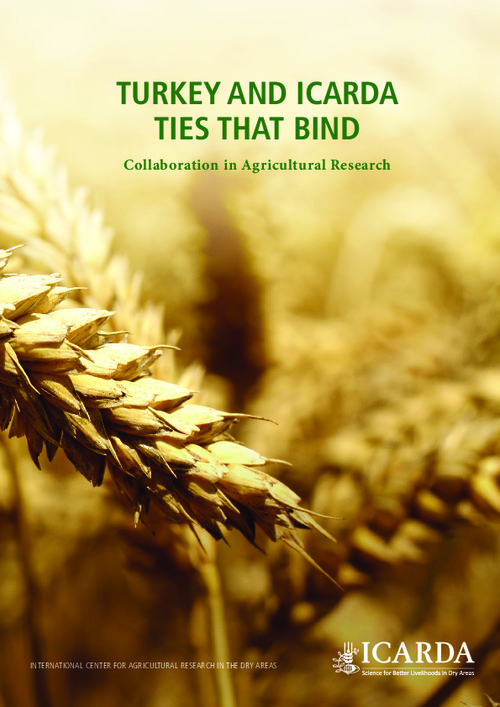 The fruitful collaboration between the International Center for Agricultural Research in the Dry Areas (ICARDA) and Turkey dates back to the establishment of ICARDA in 1977. ICARDA and Turkey signed a Memorandum of Understanding in 1986, and the ICARDA office in Ankara opened in 1990. Turkey began to make financial contributions to CGIAR in 2005 and acquired the status of a “CGIAR donor country”. Turkey has contributed USD 1.6 million to ICARDA during the ten year period between 2005 and 2015. Many projects have been successfully implemented by Turkey and ICARDA. The Regional Development Agency of the Southeastern Anatolia Project (GAP), a multi- sector and integrated regional development effort directed at the nine administrative provinces of Turkey, signed a Memorandum of Understanding with ICARDA on 26 June 1998, which provided significant momentum for the Turkey / ICARDA relationship. Another MoU was signed in 2011: The parties agreed to develop joint research projects including transfer of technology and capacity development for research institutes as part of a regional development strategy. The parties also decided to launch joint conferences and workshops and exchange academic publications, science experts, technical staff and information. The first project was launched in 1999 and developed seed systems aiming to diversify improved crop varieties and enabling farmers to produce seeds in their specific local framework. ICARDA has introduced improved and adapted varieties of wheat, barley, lentil, chickpea and vetch, along with innovative production practices, including the use of raised beds in irrigated fields of wheat to increase yield and water-use efficiency. Another joint initiative focused on the improvement of natural pastures and incomes at the level of farmers by reinforcing the development of small ruminant production. The efforts led to the introduction of new technologies such as use of agricultural and agro-industrial products, feed blocks, urea- treated straw, strategic feeding and flock management. The target to promote better milk and meat yields was met. GAP continues its cooperation with ICARDA through various activities, which aim at rehabilitating native pastures, supporting future land improvement and rangeland management, improving the production of wheat, barley, lentil and chickpea, and ameliorating the farming conditions. The collaboration between Turkey and ICARDA was taken one step further with the visit of former H.E. Mr. Mehdi Eker, the Turkish Minister of Agriculture and Rural Affairs, to ICARDA Headquarters in Aleppo on 24-25 March 2011. During this visit, the Memorandum of Understanding between Turkey and ICARDA, was renewed to strengthen further collaboration. A new MoU was signed in 2013 and is currently in the National Assembly for ratification.